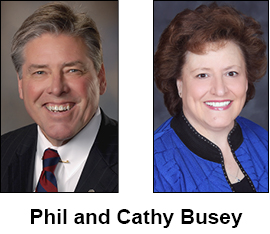 Oklahoma City University presented the 2015 Bishop Paul W. Milhouse Award to Phil and Cathy Busey. The announcement was part of the OCU report to United Methodist delegates on May 27 at Annual Conference.

Over the years, Phil and Cathy have both been active church members, including at their current church, OKC-St. Luke’s. The couple owns Delaware Resource Group and the Busey Group of Companies.

Their outstanding service is exemplified by the El Sistema Orchestra, which they founded, for children in 11 of Oklahoma City’s poorest elementary and middle schools. Over 200 students were involved in the music education program during 2014-15. The Buseys fund a large portion of this joint project, administered by St. Luke’s and OCU, in support of the Oklahoma City Public Schools.

They also have generously supported new church starts in the Oklahoma Conference over the years.

Their efforts have been recognized with several awards, including the OCU Servant Leaders Award in 2014, the Patriot Award by the U.S. Department of Defense, and the Minority Business of the Year award by the Oklahoma Minority Supplier Development Council.

In 2014, Phil was inducted into the OCU Meinders Business and Commerce Hall of Honor. He was named SBA Small Business Person of the Year for Oklahoma in 2010. He is an OCU Trustee and serves on the boards of the Economic Club, Oklahoma’s Business Roundtable, and Deaconess Hospital.

Cathy serves on the OCU Bass School of Music Advisory Board and the board of the Oklahoma City Philharmonic. She was nominated for the Journal Record Woman of the Year award in 2014.

The Buseys have provided scholarships for business and minority students, especially with OCU’s Meinders School of Business. They established the school’s Busey Leadership Institute; sponsored over 20 students and faculty for the World Business Forum in New York City in 2009; and sponsored three Business Economic Annual Summits at OCU, with proceeds benefiting Meinders School. Phil has taught in OCU’s Master of Business Administration program at Tinker Air Force Base.

The Bishop Milhouse Award was established to recognize people who give outstanding leadership in communities, local churches, and the Oklahoma Conference, in addition to being advocates for the partnership between OCU and the Church. The university is pleased to honor the Buseys in this way.

Award presenter was Charles Neff, OCU’s vice president of University-Church Relations and dean of the chapel, and accepting on behalf of the Buseys was Jeremy Sanders of St. Luke’s.

The University-Church Relations Office welcomes nominations at any time for this award, presented annually since 1982. 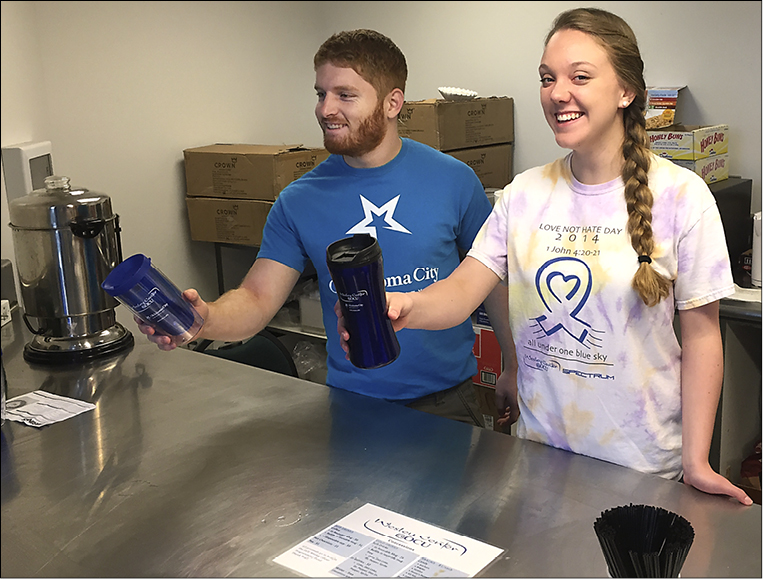 OCU senior Michael Horn and junior Morgan Mitchell offer reusable tumblers at the concession stand during an Annual Conference session at the Freede Center in late May. The OCU Wesley Center appreciated the opportunity to provide the concessions; all proceeds supported the campus ministry.