People in red T-shirts waved red signs June 7, directing worshippers to the first Sunday service for Mosaic UMC in Oklahoma City. This new church family meets at an unusual location, so that visual welcome was valuable.

Mosaic begins its ministry at Smith Chapel on the campus of Oklahoma City University, at Northwest 23rd Street and Blackwelder. The church will charter in August, according to Pastor Scott Spencer.

Attendance that first Sunday was 151 people.

Mosaic launches with a dedicated core group. The members of two existing churches, OKC-Leland Clegg and OKC-Epworth, chose to unite. As a symbolic gesture, a representative of each poured water into one baptismal bowl the first Sunday.

In the Children’s Moment, Rev. Spencer asked the youngsters to pray regularly for the church. Communion was celebrated. And people surrounded and prayed for Mark Maxey before his Holy Land mission trip.

Spencer moved to the metro on June 4, from Ponca City. "Four or five" committees met on June 6.

The OCU chapel doors were locked when he arrived early June 7. But Spencer found reassurance in that moment. A dozen people were waiting for him.

He knew God was already there.

The genesis for Mosaic occurred in 2013. Epworth’s aging building was a concern. Last year, Epworth and Leland Clegg started talking about a merger. This spring, they voted to make the change.

Then transition teams formed, with equal representation from the churches. Members became acquainted at joint activities. The combined choir presented an Easter cantata.

In advance of his move, Spencer met with the groups. He said Ponca City-Albright UMC "went over and above for me," as the pastor transitioned to his new assignment. He received a quilt and replica of the Pioneer Woman statue as farewell gifts.

Mosaic’s people had gifts for him, too. They had contacted Albright and learned the pastor’s favorite sweets and soda.

Spencer treasured connecting with Epworth’s and Clegg’s pastors. He "walked alongside" Debbie Ingraham and Marla Lobo, "a new experience" in his itinerancy, he said.

Mosaic UMC draws its name from I Corinthians 12:12-14, which compares the united body of Christ to the human body and its many parts.

Spencer cited Henri Nouwen’s "The Mosaic That Shows Us the Face of God." An excerpt: "We can admire the beauty of each stone. But as we step back … we can see … a beautiful picture, telling a story none of these stones can tell by itself."

The Merger Document states: "The histories of both churches reflect established congregations that encourage diversity, nourish social action, and support issues of justice and mercy, so that we consider it to be a union of like-minded and passionate congregations …

"We will establish our presence … as a regional, progressive, justice-seeking congregation."

Epworth’s building, which the church had occupied since 1919, was sold in December. Both congregations held final worship services on May 31.

At Epworth’s closing, worshippers sang "Forward Through the Ages" as they carried the Bible, sacramental vessels, cross, and other objects out of the building. Then butterflies were released.

A congregation of the Oklahoma Indian Missionary Conference now meets on Sunday mornings at the Clegg property, 102 E. Hefner Road.

Spencer’s office also is there. The church website is www.mosaicokc.org. Worship begins at 10:30 a.m. Sundays.

"We anticipate a dynamic, prayerful process over the next year," states the Merger Document. 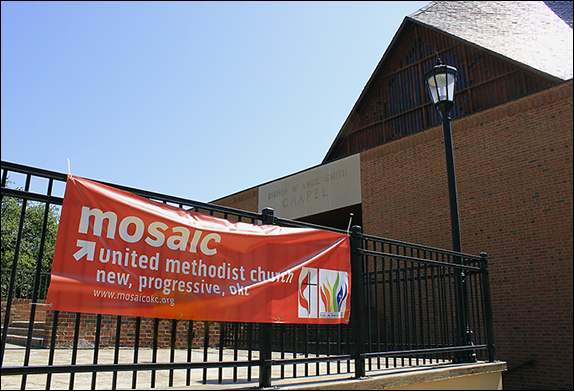 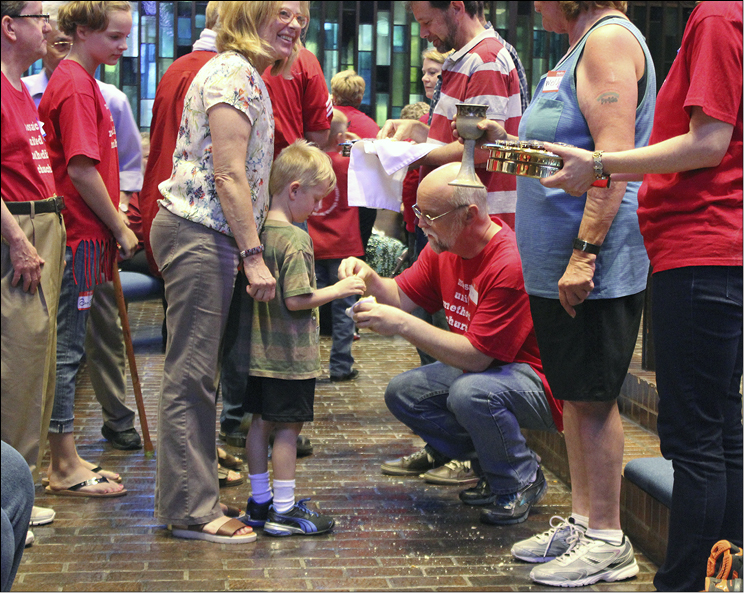 Jerry Thompson kneels to a child’s level for Communion on June 7 in the first worship service for Mosaic UMC, meeting at OCU’s Smith Chapel. Serving beside Thompson is Pastor Scott Spencer, in striped shirt.