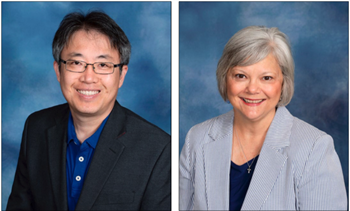 Bishop James Nunn recently announced several changes to district leadership, including the appointment of two new superintendents. The changes will go into effect on July 1.

Rev. James Kim has been announced as the next superintendent for the Wichitas District. He will take on the leadership role currently filled by Rev. Connie Gibson, who will move to the Council Oak District upon the retirement of Rev. Cindy Havlik.

“(James Kim’s) focus on making disciples, service to churches in the conference, and his work on the Board of Ordained Ministry and the Conference Relations Committee equip him for the work in the district,” the bishop said in his announcement.

Rev. Carol Cook Moore has been announced as the next superintendent in the Northern Prairie District. She will fill the role currently held by Rev. Tish Malloy, who will be appointed to lead the Crossroads District as Rev. Rockford Johnson returns to the pastorate to lead Norman-McFarlin.

“(Carol Cook Moore’s) knowledge of the personnel processes of the church have equipped her to serve effectively on the district,” the bishop said in his announcement.

Kim is the pastor of Purcell-Trinity in the Heartland District where he has served since 2014. His service in the Oklahoma Conference dates back to 1999, and he has previously served at Comanche and Noble. Kim earned a bachelor’s of theology at Methodist Theological University in Seoul, South Korea in 1989. He moved to the United States the year after he graduated, and he earned both a master’s degree and a doctoral degree from the Perkins School of Theology at Southern Methodist University. Kim said he had not thought about being a superintendent before he was appointed to the role, but he hopes he can help people build relationships that help all Christians focus on functioning together as a family.

“I’m overwhelmed, so I’m praying. I’m really praying hard to discern God’s will for my life, for this task,” Kim said. “It’s absolutely the time to bow down and seek God’s will, guidance and vision.”

Cook Moore is the pastor at Alva-First and the chair of the Board of Ordained Ministry. Her service in the Oklahoma Conference dates back to 1984. She earned a bachelor’s degree from Oklahoma City University in 1980, a master’s degree from Saint Paul School of Theology in 1984, and a doctoral degree from Drew Theological Seminary in 2009. Over her ministry career, she has served four churches, the Northeastern State University Wesley Foundation, and the Wesley Theological Seminary as an assistant professor of worship and preaching. She said she is humbled by the opportunity, even in light of the uncertainties facing the denomination.

“I think every pastor needs to ask, ‘what is essential?’ I think we’re getting there pretty darn quick with this pandemic,” Cook Moore said. “What is essential to me is to keep the standard before myself, to treat everyone with dignity, to listen, and to seek compassion in whatever discernment and decisions are before me individually, are before the cabinet, before the conference, the general church.”

When Kim and Cook Moore step into their roles on July 1, five out of eight of the conference’s superintendents will be either female or a person of color. Oklahoma has had female superintendents and people of color in the highest levels of leadership before, however, this is the first time that the majority of the superintendents will represent a minority race or gender. Cook Moore said having a diverse group of leaders can help ensure different perspectives are present and prevent homogenous thinking.

“The reality is that I do not represent all women, and neither do my female colleagues,” she said. “But when you have voices that come from a non-dominant power culture, I believe it creates more openness to seeing the possibilities for the church in a broader way.”

Kim, who has led cross-cultural ministry for the last 20 years, said diversity is often helpful for the life of a congregation. He also believes it will help the Oklahoma Conference grow spiritually.

“I’m from Korean churches, and we practice the Christian faith a little differently than the western cultures. In my experience, I’ve learned from my congregation, and they’ve learned from me,” he said. “If we can put all these different ideas and experiences from different cultures in one part and recreate the spiritual culture, not only for the local churches but for the annual conference, I think we can contribute to something great.”

Both Kim and Cook Moore are keeping their faith central as they discern the will of God for their churches, districts, conference and denomination. For Kim, faith is the guiding principle for how to think and act like Jesus; faith gives him hope for the future. When he considers what future the denomination might face, he is reminded of the Biblical call to love one another.

“We all read the same Bible, but interpret the message differently,” Kim said. “I like to say that it is all about God’s love. It teaches us to know and believe God’s grace of salvation through Jesus Christ. I like to state that the core message of the Bible is to love God our Lord with all our heart, mind and soul. Anyone who truly loves God desires to know God’s will and obey His word. God’s will for His children is to love one another as Jesus loves us.”

Cook Moore defines faith as an action, a noun and an identity – both personal and communal – that affects how a person chooses to live in the world. She believes that faith has to be engaged with so that it does not become stagnant, brittle or weak.

“Faith is something that has to be exercised. You pray. You read scripture. You attend to the means of grace,” she said. “If we read the Lord’s prayer or Psalm 23 or John 3:16 and think, ‘Oh, I’ve heard that, I know what it means,’ then we’re not exercising anything other than a memory.”