Missionary to arrive in Oklahoma from Peru

A native of Chile, she received a call to religious service at age 19. Her life’s work centers on theological education, dealing with women’s issues; peace; and pastoral care for people with HIV/AIDS and disabilities, at-risk youths, and farmers.

To invite her to make a presentation at your church during her visit, contact Karen Distefano, who is the Conference secretary of Global Ministries, by calling 918-440-9213.

United Methodists and other U.S. Christians will join the reconciliation and reunification committee of the National Council of Churches in Korea on July 25-26 for a "Peace Rally and Prayer for Peace on the Korean Peninsula." The event takes place on the 61st anniversary of the Korean War Armistice.

Debate within the Church on human sexuality issues continues to make headlines.

• The Oklahoman reported on the May 27 visit of Frank Schaefer to a mostly United Methodist audience in downtown Oklahoma City. Formerly a UM pastor, the Pennsylvania man spoke to about 200 people. In 2007, he officiated at his son’s same-sex wedding. His clergy credentials were removed in 2013 after a Church trial. Read the Oklahoman’s story: http://newsok.com/defrocked-clergyman-shares-his-story-with-oklahoma-united-methodist-group/article/4867505.

• United Methodist News Service (UMNS) on May 22 reported that a group of some 80 pastors and theologians are calling for a formal plan to split the denomination. Describing itself as traditionalist, the group says differences over homosexuality and other issues are irreconcilable. Tom Harrison, a member of the group and senior pastor of Tulsa-Asbury UMC, told UMNS that recent clergy defiance of church law by performing same-sex unions convinced him that going forward as one denomination isn’t realistic. Read the story: www.umc.org/news-and-media/amicable-breakup-of-umc-needed-pastor-group-says

Find continuing coverage of this issue and more at www.umc.org/news-and-media.

Small red cloths wrapped with sage and tobacco were passed along the rows of people May 28 at the Greater New Jersey Annual Conference.

The contents represented things that God made, and also symbolized unity between Native Americans and The United Methodist Church.

The distribution took place as the Conference and the Lenape Native Americans held an "Act of Repentance" to mend relationships between the two. (UMNS)

Age 86, Leo Fong, otherwise known as a Kung Fu Grandmaster Pastor, likes to kick up his heels. Joining him are rows of older adults. In Los Angeles, Rev. Fong teaches seven classes a week. Once a star of martial arts movies, he now sees his calling as helping other seniors stay fit. (UMNS)

Jaime Clark-Soles didn’t hesitate to involve herself and Perkins School of Theology in Dallas in the 2014 Summer Institute of Theology and Disability. Acting on relevant issues — from building access to the religious dimensions of suffering — strikes her as a clear priority. "It’s really important in terms of the church being the full church," said Rev. Clark-Soles, an American Baptist minister who teaches at Perkins. (UMNS)

It’s a bird. It’s a plane. No, it’s inspiration for a super sermon series.

During the month when his Kansas town held its "Smallville Festival," Jeff Slater of First UMC offered his own Smallville sermon series to teach "heroic lessons."

Slater said he didn’t think the congregation knew the connection between Superman and religion could be as deep as it has proven to be. (UMNS) 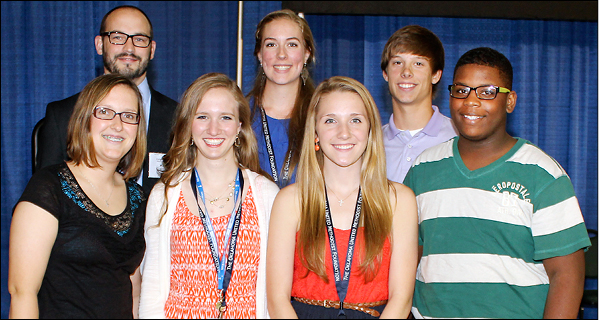 JOURNEYING FAR — This Oklahoma delegation will attend the denomination’s Global Young People’s Convocation and Legislative Assembly on July 16-20 in the Philippines. They are: Jay Williams of Wewoka; Kirsten Schiska of Fairview, Katie Shewey of Enid; Morgan Ross of Oklahoma City; Matt Franks, pastor at Locust Grove; Miranda Luster of Stillwater; and Drew Walker of Calumet.
Making Disciples of Jesus Christ for the Transformation of the World