Almost 100 Oklahoma Conference United Methodist Women watched one of their own be consecrated as a new deaconess, a lay ministry role, on April 27 during the 2014 UMW Assembly.

Recognition of Jerrie Lindsey, a member at Holdenville UMC, was a highlight for those who traveled to Louisville, Ky. Lindsey also is McAlester District UMW president.

For Holy Communion, each Conference team was asked to provide bread representive of its region, Hull explained. The various breads — pita, cornbread, etc. — symbolized the diverse body of Christ coming together.

Among exhibitors from around the world were Neighborhood Services Organization of Oklahoma City; Cookson Hills Center; and Church World Service (CWS), a nonprofit partner with The UMC. Rebekah Belase of Oklahoma staffed the CWS booth. Rev. Belase is assistant director for that agency’s Greater Plains Region. 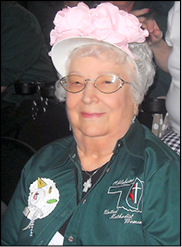