Bishop Hayes spoke his welcome in English, Spanish, and Choctaw to open the Annual Conference business session on May 27.

Two hours that morning were dedicated to an "Act of Repentance and Reconciliation With Native Americans." This program educated laity and clergy about:

The audience engaged in a prayerful, powerful time of reflecting and asking forgiveness.

Leadership was by Bishop Hayes; David Wilson, who is Oklahoma Indian Missionary Conference superintendent; six people who completed a Native American immersion experience through Saint Paul School of Theology at OCU; and the choir of D.D. Etchieson United Methodist Church, an OIMC congregation.

The Saint Paul seminarians read from the written work of historian Tash Smith of Shawnee.

The choir presented a song composed on the Trail of Tears in the early 1800s, during government removal of Native Americans to Oklahoma.

They were invited "to be witnesses to our first step in our Conference’s Act of Repentance and Reconciliation," said the bishop. He also is OIMC episcopal leader.

A 2012 General Conference resolution called each annual conference to intentionally connect with Native Americans in equal friendship and ministry. Responsibility was assigned to the Council of Bishops.

Bishop Hayes will lead further distinct steps in Oklahoma in the coming years.

In 2015, the Oklahoma Conference will engage with OIMC in hands-on missions, and in 2016 both Conferences will worship together. Throughout, Hayes wants understanding to grow about the Native experience in the U.S.A.

"We have a significant Native population in our state," Hayes said in a Contact interview, "but little knowledge of Native history. Some things never made the history books."

He assured, "I’m not proud of what went on, but not accusing or blaming. We want to share the history of Native Americans and identify their struggles. We want to be more aware how Native people within the Church can maintain their spiritual identity.

"Then we will ask: Where do we go from here? We are journeying together. We want to determine how to live into the future together, with hope and vision."

In his report to delegates, OIMC Superintendent Wilson described collaboration that’s happening now. Two closed churches in the Oklahoma Conference, Commerce and Weleetka, are being resurrected as OIMC congregations.

Read the script for this program at www.okumc.org/Resolutions. Click "Act of Repentance." 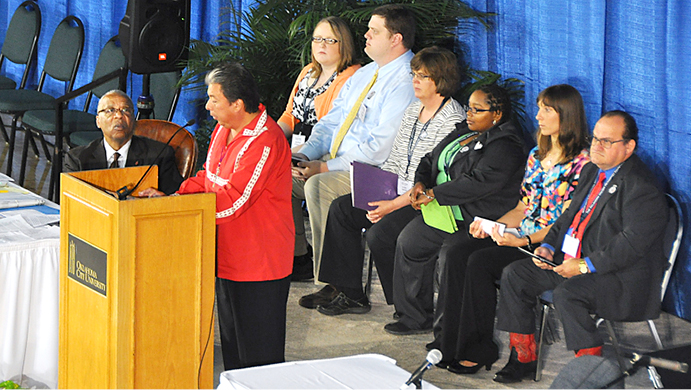 Seated behind David Wilson, Saint Paul seminarians were readers for the "Act of Repentance" at Annual Conference. 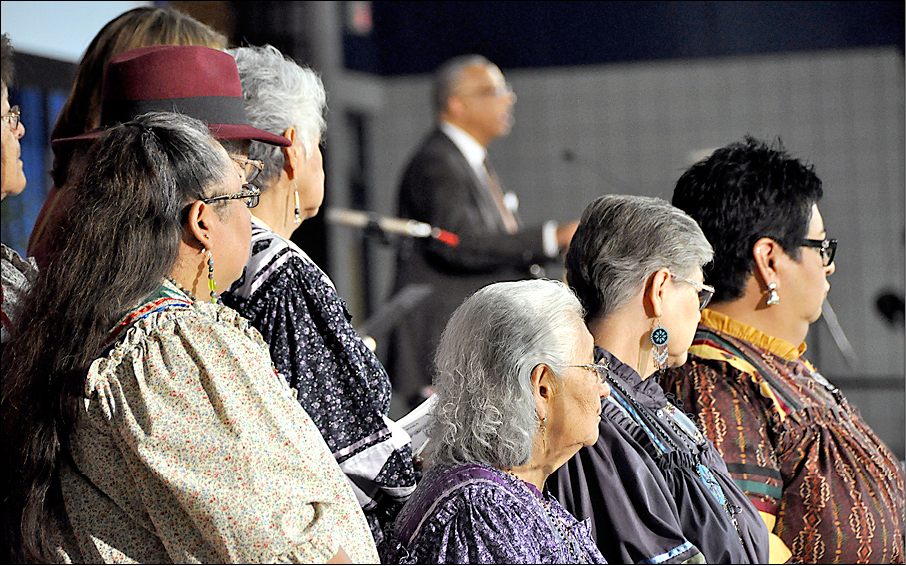