The Giving of Ourselves 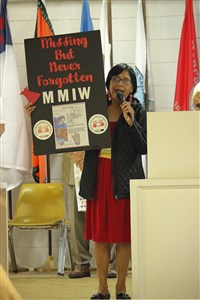 The Giving of Ourselves” was the theme for the 175th session of The Oklahoma Indian Missionary Conference, held June 6-8 at the Northeast Region Center at Preston, Oklahoma. The conference on the importance of hospitality among Indigenous peoples around the world and how OIMC has worked to provide that hospitality to many.

As a part of the recognition of 175 years as an Indian Methodist Conference, delegates recognized the 200th anniversary of the Missionary Society of the Methodist Episcopal Church.

Wyandotte Chief Billy Friend was present to bring greetings and share that history and connection with the United Methodist Church.

The conference brought attention to two areas where Native Americans have been impacted including the recognition of the hundreds of missing and murdered Indigenous women in this country. The conference heard of young women  connected to OIMC who are still missing.

The conference was asked to form a task force to look into the recent news that Ft. Sill Military Base may be housing immigrant children who are unaccompanied.

Bethel Hill, one of the oldest churches in OIMC, received the One Matters Award from Discipleship Ministries. The award recognizes churches that are making movement in professions of faith or in growth.

One Elder was ordained at the conference and two were received as licensed local pastors.