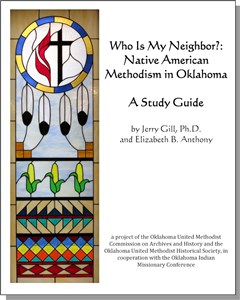 The first edition of “Who Is My Neighbor?: Native American Methodism in Oklahoma – a Study Guide” is now available from the OKUMC Commission on Archives and History.

Free to download at okumc.org/nativedoc, the 60-page study guide is a companion piece to the Commission’s 26-minute documentary “Who Is My Neighbor?: Native American Methodism in Oklahoma” that was played during the Act of Repentance conducted at Annual Conference 2016.

More than 500 DVDs of the documentary have been distributed to Methodist congregations of the Oklahoma Conference and Oklahoma Indian Missionary Conference, and it has been included in studies by Methodist groups nationally, including the United Methodist Men, United Methodist Women, and “Mission u” curriculum.

The documentary tells the history of the complex relationship between Native Americans and the Methodist Church, why the General Conference performed the 2012 Act of Repentance, and how United Methodists can work toward reconciliation with their Native American neighbors. Copies of the documentary are still available through the Conference Archives and through Interlibrary Loan.

The new study guide is divided into four parts, coinciding with the four narrative sections in the documentary, and provides more in-depth information about topics raised in the video. It also features discussion questions designed to provoke meaningful conversations among Natives and non-Natives alike.

“We are really excited to be able to share this new resource with Oklahoma Methodists,” said documentary co-director and study guide co-author Jerry Gill. “Film is a great medium, but it’s hard to cover 300 years of history in 26 minutes. The study guide allows us to provide more detail about some of the events and issues we could only touch on in the documentary, and the better people understand the history behind the 2012 Act of Repentance, the better they will understand how to respond to it.”

In 2017, Jerry Gill received the Distinguished Service Award from the General Commission on Archives and History, in large part due to his work on the “Who Is My Neighbor?” initiative.

“The next step after repentance is supposed to be reconciliation, and one of the keys to reconciliation is bringing people together for meaningful conversations,” said OKUMC Commission on Archives and History Chair Rev. Brian Bakeman. “The principal goal of the documentary was to inform and offer a historical context for the 2012 Act of Repentance. This study guide is really designed to encourage small group study and discussion. I think the more we can get people talking, the more clear and easily recognizable the path to reconciliation will become.”

“This is the first of what we hope will be a few editions of this study guide,” said co-author Elizabeth B. Anthony. “We’re hoping to gather feedback from the small groups who use it and develop some guidance for discussion leaders as we identify fruitful approaches. In short, like the reconciliation it encourages, this study guide is a work in progress.”

“I am excited about the study guide,” commented David Wilson, superintendent of the Oklahoma Indian Missionary Conference. “Persons who want to explore the history of Native Americans in general and OIMC will find it very useful. It is very well done and provides an opportunity for folks to probe deeper into the rich and challenging history of Native American missions in Oklahoma. I think it will be well received.”

The new study guide and additional resources, are available online at okumc.org/nativedoc.