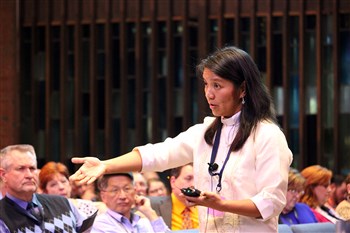 With minimal discussion and a show of hands, the Oklahoma Annual Conference voted to pass two major changes to clergy and staff benefits: recalculating a retiree subsidy according to years served and adopting a group health insurance plan.

Annual Conference was held on May 27-30 at Oklahoma City University with Bishop Jimmy Nunn presiding.

More than 1,300 local church delegates, clergy and guests attended in person or watched live online to learn about the state of OKUMC’s many ministries with special focus given to work performed by Mission and Ministry (formerly Connectional Opportunity) ministries. The Conference also recognized 22 retiring clergy and 15 new ordained, commissioned and associate members.

Voting members elected lay and clergy delegates to General and Jurisdictional Conferences. Special services were held off-site at nearby churches, with OKC-Wesley hosting the memorial service and OKC-St. Luke’s hosting the ordination service.

Part of the offering will be used to help pay for OIMC youth attending Youth 2019, a four-day discipleship event for middle and high school students and their leaders. Some students also will participate as speakers in a workshop examining the use of Native American imagery and culture as sports mascots. Youth 2019 will be held July 10-14 in Kansas City, Missouri and is sponsored by Discipleship Ministries.

Guest speaker Rev. Dr. Amy Valdez Barker, executive director for the Global Mission Connections Unit of Global Ministries, shared about the history and importance of missions on three of the four days of Annual Conference.

Valdez Barker spoke first with Youth at Conference, a gathering of youth delegates from around the state, to discuss Global Mission’s fellowship program for young people who desire to pursue a call in mission work. The next day she presented “Two Hundred Years of Methodists in Mission” during the opening session, followed by “Yesterday – Today – Tomorrow: God’s Movement through Methodist Missions” during learning times for laity and clergy. She ended her time at Annual Conference the following morning by discussing how churches can engage in local missions during a Missions breakfast.

“We’re a people of stories... With each passing century, we have the power of the Holy Spirit to see how God is still at work in each of our lives,” Valdez Barker said. “There is no mission without the church, and the church doesn’t exist without the mission.” 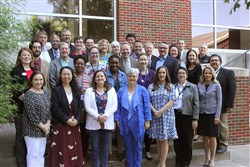 Delegates and alternate delegates elected to the 2020 General and Jurisdictional Conferences.

Though voting sessions ran slightly over time for both lay and clergy voters, the Oklahoma Conference elected all 34 clergy, lay and alternate delegates to General and Jurisdictional Conference on the first day of business.

One of the biggest changes is the Conference’s decision to move from a self-funded insurance plan to Health Flex, a group health plan offered through Wespath.

Information released by the Board of Pension and Health Benefits prior to Annual Conference stated that the self-funded plan had lost money every year since 2015 and would risk insolvency in 2019 if the Conference did not raise the amount being direct-billed to churches to pay for health insurance. The increase took place prior to Annual Conference, and the move in 2020 to Health Flex was in line with keeping financial solvency.

“Even as we made the hard decision to raise the amount churches had to pay, we were already looking at other options for providing group health insurance,” said Rev. Charla Gwartney, chair of the BPHB, in her report to the Annual Conference.

The Board voted unanimously to recommend moving the Conference health insurance to Health Flex. Gwartney said the decision to move to Health Flex was separate from the issue of insolvency.

A second significant change was how Conference funded Health Reimbursement Account (HRA) subsidy for retirees would be calculated. Pension benefits through Wespath were not affected by the recalculation of the HRA subsidy. The Retiree Medical Apportionment, which determines the subsidy payout, was set at $1.3 million.

An additional $400 equalization grant would be given to retired clergy with 25 or more years of service and 20 years or more of pre-1982 service.

The proposal passed by majority vote, and the distribution schedule will become effective on Jan. 1, 2020.

In addition to approving changes to active and retiree health benefits, the Conference voted to pass the proposed 2020 budget without amendment. The 2020 budget includes $10,160,639 for Total Conference Apportionments, which includes $2,733,993 for General and Jurisdictional apportionments. The overall budget passed for apportionments and Mission and Ministries is $13,328,599, or a 0.46 percent decrease from 2019. 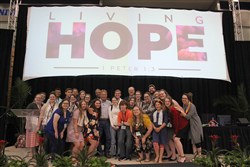 Youth at Conference invited youth delegates and guests to participate in Annual Conference in meaningful ways.

Both lay and clergy speakers acknowledged the deep pain and division resulting from the Special Called Session of General Conference held in February 2019. Rev. Linda Harker and Don Kim, respective heads of the clergy and lay delegates to GC 2019, both spoke about the division that characterized the special session in their reports to the Oklahoma Conference. Each received a standing ovation for their remarks.

A request to suspend the rules to hear a petition titled “A Resolution of Confession, both of and from harm, caused by the Special Called General Conference of 2019” failed by a vote of 332 yes to 333 against. A revote also failed, 309 yes to 395 no. A two-thirds vote was required to hear the petition.

Bishop Nunn addressed the felt divisions in his episcopal address, paraphrasing 1 Corinthians 1:10-13 to liken the divisions among the early Corinthian believers to divisions among United Methodists today and asking if Christ has been divided among the Traditional, One Church, Connecting Conference and Simple Plans presented at GC 2019. He addressed divisions in the Conference again during his sermon at the ordination service, encouraging people to love one another.

“One of the hard lessons of ministry is that when we engage in the ministry of peacemaking, we don’t feel peace. We embody, many times, that very conflict. Have we not felt that since February?” Bishop Nunn asked. “We’re embodying the conflict, the tearing of each other. And the more we seek to make peace, the less peace we have. ‘Blessed are the peace makers because they’re gonna feel peace?’ No. What does it say? ‘Blessed are the peacemakers, for they will see God.’”

Bishop Nunn ended the final day of Annual Conference with a Spirit-filled prayer, encouraging all believers in the Conference to extend their hands on behalf of all those in need.

“Lord Jesus, just fill us with a sense of the gospel to share hope because every life, Lord Jesus, matters to you. You died for us all; may we give ourselves for all,” he prayed. “Come and heal your church and fit us for your mission. We give ourselves to you now in the holy name of Jesus, and all the people said, Amen.”