Founding pastor Chris Dodson called the people to gather with him beneath the spotlights in CrossTimbers’ sanctuary space, and they responded.

They clustered around Rev. Dodson and incoming pastor James Hunt, adding their voices to a special litany on June 1. It was Charter Sunday for CrossTimbers United Methodist Church of Moore, Okla.

Then the hugging started — and continued. God has transformed rented retail space into home for this young church family.

Charter membership will be totaled at the end of this month. On June 1, Dodson baptized four youths and a young adult. Rev. Hunt welcomed six new members on June 15.

CrossTimbers offers contemporary worship in a relaxed setting. T-shirts and jeans are typical attire. (And the donuts are remarkable.)

CrossTimbers was birthed in 2008 by the Oklahoma Conference and "mother church" First UMC of Moore. That’s when Dodson was appointed as a church planter and associate pastor at First UMC.

The new congregation’s first worship service was April 5, 2009, at a Moore elementary school.

In August that same year, CrossTimbers launched at its current location, in a shopping center at 3004 S. Sunnylane. The worshippers that day included "Mom" Tish Malloy — her nickname because she was senior pastor of the mother church at that time.

Rev. Malloy and Chris’ real mother, Donna Dodson, shared in the joy of Charter Sunday. Both are district superintendents.

Remember how the church began, Rev. Johnson advised. "Bask in it for a minute, then move on. This is your home; keep trusting in it."

A number of congregants, as well as the founding family, suffered from the May 2013 tornadoes. Yet "out of desolation, growth happened," Johnson declared. "You are not alone."

Clergymen Dodson and Hunt, with their wives and children, stood together before the people, a poignant witness to the United Methodist connectional system.

The room held its breath as Dodson passed to Hunt a basket filled with leaves, on which members had written their names. Dodson symbolically transferred the care of the flock to a new shepherd.

The Hunts previously served at Broken Arrow-First UMC. The Dodsons’ new appointment is at Frederick.

CrossTimbers’ milestone moment follows the chartering of Connect UMC, Edmond, in 2013 and of Edmond Chinese International UMC in 2003.

You helped plant CrossTimbers through Apportionment giving. A total of $290,130 was allocated through the Department of Congregational Development. 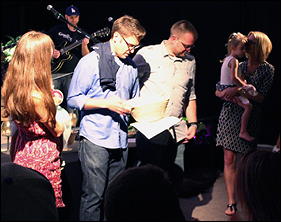 Flanked by their wives and children, James Hunt, left, and Chris Dodson bow their heads in prayer on Charter Sunday at CrossTimbers UMC in Moore. 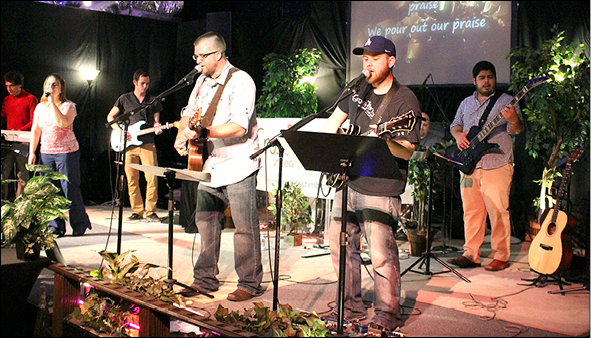