6/27/2014
'Who in your community might you reach if you applied to New People, New Places for help in discipling?'

Delegates allocated $700,000 to fund such ministries in 2015, through New People, New Places grant awards. Money will become available by June 2015.

Application forms and more information soon will be posted on the website, www.okumc.org. Any church or Conference ministry of any size may apply for a grant.

"Who in your community might you reach if you applied to New People, New Places for help in discipling?" asked Craig Stinson, director of Connectional Ministries.

The budget action can reduce by almost 8 percent the Conference Apportionments assessed for each church.

The Annual Conference met May 26-29, hosted by Oklahoma City University and OKC-St. Luke’s UMC. Theme was "All Things New," based on Revelation 21:5.

"Hungry, hurting people need to see by our witness that God is making all things new," Bishop Hayes declared in his Episcopal Address. He held up a Bible during his ordination sermon and said, "What most of us think of as greatness is radically different than what is in this book."

"God said, ‘I need somebody.’ What will you do? I can only imagine," declared guest preacher Jasmine Smothers of Georgia in the opening worship May 26.

And God’s priorities were pursued in creative ways over the following days. Three phrases resounded: "Making all things new," "I can only imagine," and "We make disciples!"

"I can only imagine the millions of prayers, thousands of cookies baked for VBS, and untold numbers of people who sought help in these churches," said Conference Lay Leader Chuck Stewart of Stilwell. "Through the years, lives were made better because of the people there."

More than 100 Oklahoma Conference churches have closed since 1980.

"Worship attendance has dropped by 6,000 people in the last seven years," he remarked.

Tom Junk of Tulsa described the Oklahoma Conference as a great tree and Conference agencies and ministries as its strong branches.

"But the roots are diminishing," he said. Junk chairs the Council on Finance & Administration (CFA).

Lower overall numbers aren’t the only indicators causing worry about the Church’s life.

A youth camp was cancelled because of a lack of volunteer counselors, noted Bishop Hayes. "You send your children. Is that not important for you to go, too?"

The trio of plans approved by written ballot during Annual Conference deploys resources in strategic ways to defy those downward trends. More than 200 leaders were engaged in developing those plans.

"We give ourselves over to God’s work in making all things new," said the bishop. "It’s not about saving the institution of the Church. It’s about bringing all into the redemptive work of the Church."

Sam Powers, who co-chairs the Annual Conference Council (ACC) concluded, "Jesus did a new thing quite often in his ministry, and it would leave people astounded. Let us contine to strive to be Christ-like in a world that senses God but may not know him yet."

Funding for new church starts, re-starts, and revitalizations also will climb to $700,000 in the Department of Congregational Development.

"I think it is noteworthy that the initiative for shifting resources to new churches, communities, locations, revitalizations, etc., started with the laity members of CFA," said Chairman Junk. "We were so convinced that we have to do this and do it now, while we still have resources and a strong critical mass of ‘workers at the harvest.’

"From the CFA standpoint, we will be carefully tracking the evaluation matrix to ensure we are not squandering this chance."

Oklahoma City University, Campus Ministry, Circle of Care, and the Treasurer’s Office will experience the largest reductions in funding in 2015.

Incremental shifts in funding across four years is envisioned by leaders, although decisions must be made annually.

The CFA and ACC announced they will partner to provide training in fundraising for agencies and boards, according to Rev. Powers.

District superintendents and the Extended Cabinet members have also had their pay adjusted.

The Apportionments for World Service and General Church Ministries, plus Jurisdictional Ministries, comprise about 18 percent of the overall budget and cannot be modified.

Required by 2012 General Conference action, the district superintendent's new role as missional strategist contributed to the proposal for missional realignment of districts, which perplexed some delegates.

They wanted specifics in place about new structures before voting. The Book of Discipline assigns to the Annual Conference decisions on the number of districts; the Cabinet and bishop bear responsibility to set district boundaries.

Oklahoma will spend a year transitioning to the new eight-district system, effective June 1, 2015.

The changes in retired clergy health care are expected to save $1.2 million in Apportionments.

The Pension & Health Benefits Office set two clergy benefits retreats for fall: Sept. 25-26 at Canyon Camp, and Oct. 2-3 at Camp Egan. They will include details about the new partnership with One Exchange and about Health Reimbursement Accounts to be established by the Conference for retired clergy.

So what else is new(s) from Annual Conference? Here’s a sampler.

• Phil Hodson was introduced as a new church planter for the Lawton area.

• Total assets managed by the Oklahoma United Methodist Foundation reached an all-time high of $262.1 million as of Dec. 31, 2013.

• The offering totaled $45,609 for typhoon relief and Asbury College in the Philippines.

• At least 2,000 emergency kits for UMCOR were collected by the Office of Mission.

• The Amazing Pace, a walking program/wellness incentive, was introduced for clergy.

• Virtual participants watched 2,000 hours of the conference via the Internet live stream.

• Prevent/Recover is a new partnership with OCU to develop addiction ministries. Story >>>

• Two families pledged matching gifts that will triple each donation to the Pastoral Education Fund. Story >>

In the July 18 newspaper:

Whose speeches inspired us? 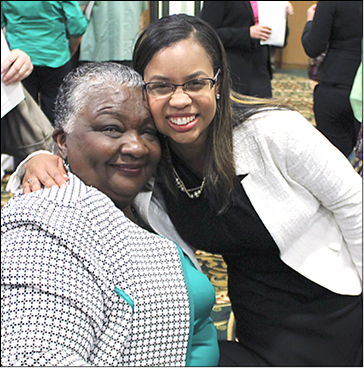 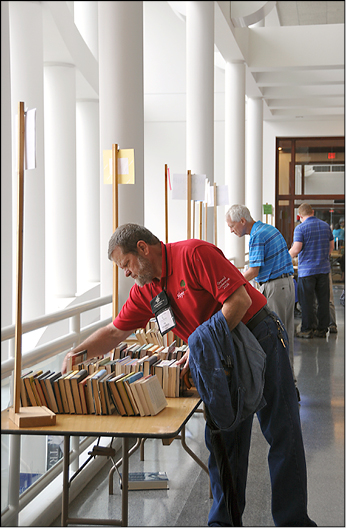 Jim Hollifield peruses the gently-used books for sale by the Conference Retired Clergy Fellowship. The group raised $1,713.95 for the Clergy Crisis Fund. 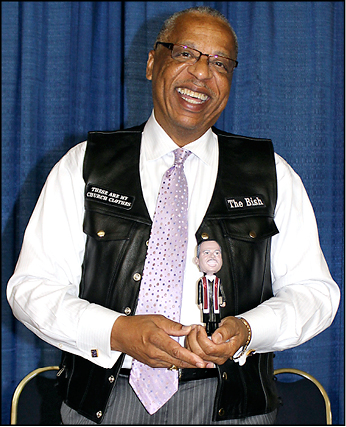 Bishop Hayes cheerily displays his namesake bobblehead, presented by Carlos Ramirez. To get your own "Bob-ble Hayes" figurine, a church must contribute more than its Apportionment amount to the Hispanic Ministries line item. The bishop is wearing a leather vest given to him by the United Methodist Motorcycle Association. 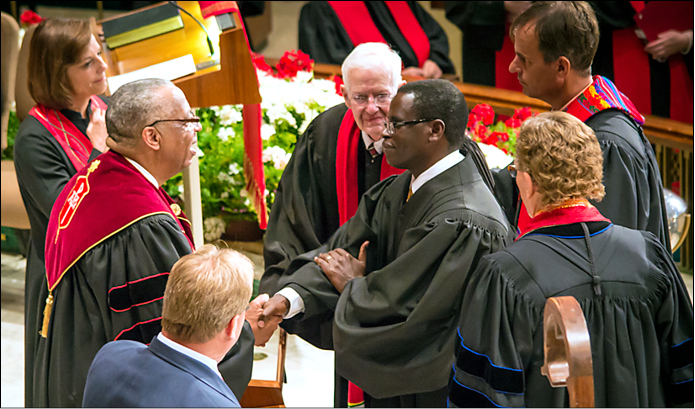 Bishop Hayes congratulates Gerard Nsabimana after his ordination as an elder May 28 at OKC-St. Luke's. 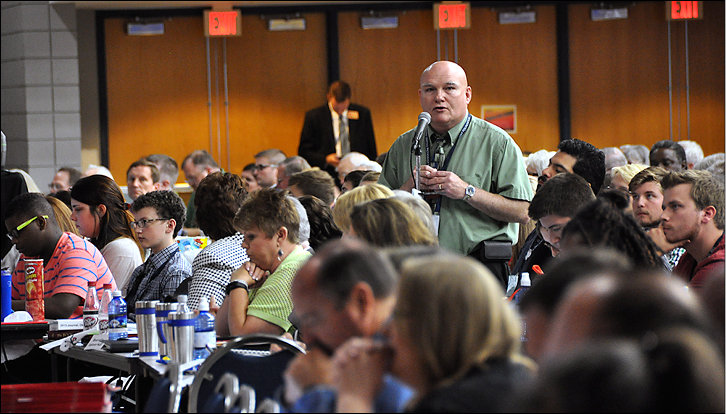 Clergyman Jim Hill proposes an amendment to the 2015 budget during the morning business session May 29, in OCU’s Freede Center. 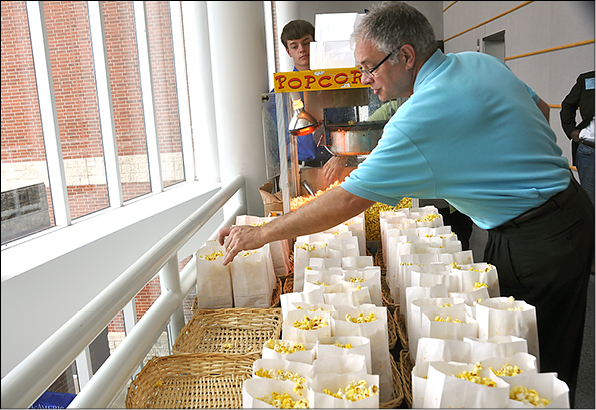 Tod Bryant of Circle of Care sets out free snacks. Follow the smell of fresh popcorn to find this display each year. 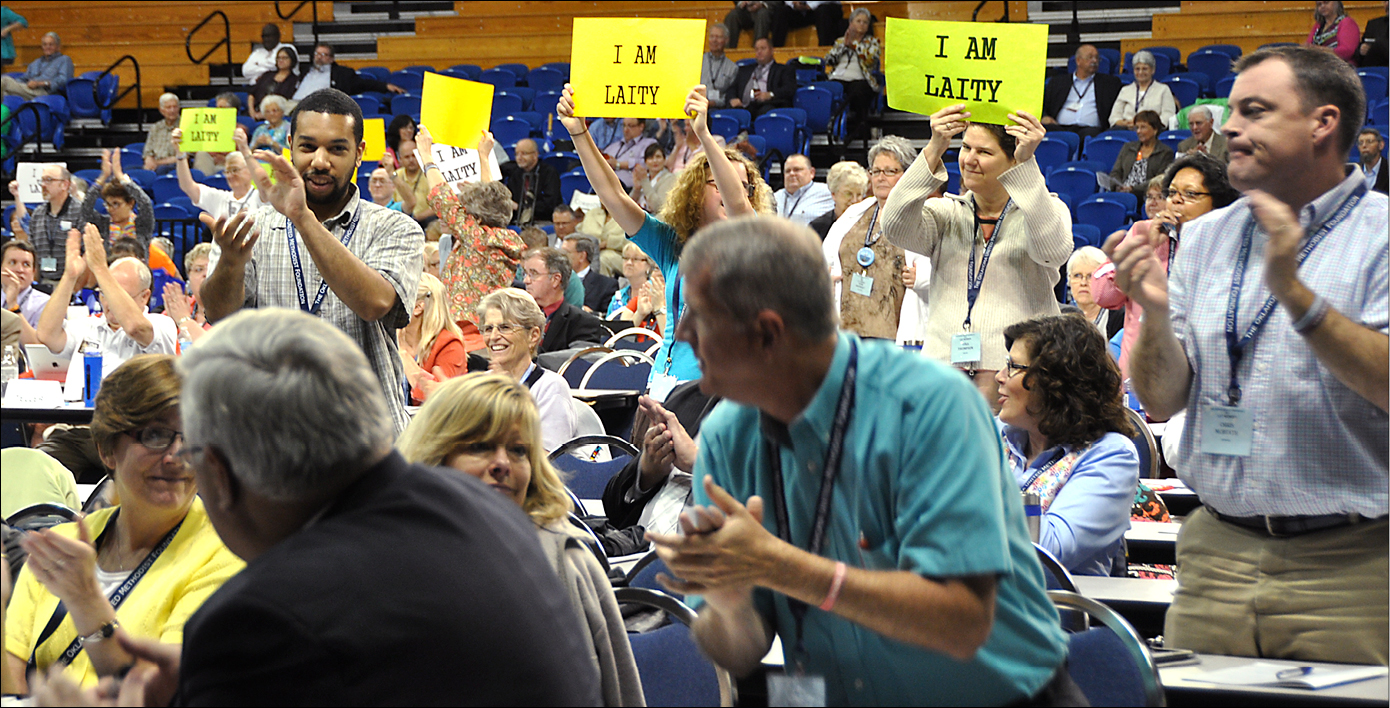 Delegates applaud the signs and digital fireworks that punctuated the Board of Laity report by Conference Lay Leader Chuck Stewart.