Sixty years ago at Annual Conference, a young Marvin Nelson received his first appointment, to pastor the rural communities of Berlin and Deer Creek in western Oklahoma.

As a student at Oklahoma City University and passionate about his call to ministry, Marvin hitchhiked Route 66 each weekend to share the Word of God.

Well into his retirement years, Marvin retains that passion for his call and sharing the Word. With his wife, Kaye, beside him, they serve OKC-Mayfair Heights Church, where Marvin is senior pastor emeritus.

Mayfair Heights UMC is very special to both of them. Kaye’s parents were founding members, and Marvin also pastored the church early in his career.

On May 28, the Oklahoma United Methodist Foundation honored Marvin and Kaye with the Jim Egan Legacy Award. During the report to the 2014 Annual Conference, the prestigious honor was presented by Bishop Hayes; Bill Junk, Foundation president; and Bob Long, who chairs the Foundation Board of Trustees. Lay and clergy delegates rose in a standing ovation for the couple.

"With their great love for the Church, Marvin and Kaye are generous with their resources. They dream ways to reach the community, overcoming budget issues. This was evident when they tirelessly worked to secure funding for Mayfair Heights to offer Vacation Bible School and Trunk or Treat for the first time in many years," said Junk.

Evangelism always has been at the heart of Marvin’s ministry. He believes that enthusiasm is one of the gifts of the Holy Spirit. "Building up and encouraging persons is God’s only business – and ours!" he said.

Marvin and Kaye established a scholarship fund at the Foundation for his alma mater, OCU. A pastor’s son, Marvin attended the school through scholarships, loans, and working three jobs. This scholarship is for undergraduate students seeking to become United Methodist pastors. Through this fund, Marvin and Kaye’s legacy of ministry and generosity will continue for generations.

The Nelsons have been married for more than 25 years, and Kaye plays a strong clergy-spouse role beside Marvin. In each area of ministry, she also gives of her time and talents. She is as passionate as Marvin about evangelism.

Marvin’s pastorates include Hunter, Lawton-St. Paul’s, Cushing, and Guthrie-First. He formally retired in 2002 after service as the Woodward District superintendent. Since then he has served as an associate at New Covenant UMC in Edmond as well as at Mayfair Heights. Marvin also is chaplain for John Vance Auto Group, providing pastoral assistance and counseling to John Vance employees across the state.

The Foundation instituted the Jim Egan Legacy Award in 2003. It recognizes persons who model Christian stewardship and philanthropy. Egan, of Muskogee, was an original incorporator of the Foundation and the award’s first honoree.

Other past award recipients: Richard and Norma Small of Tulsa; the late Dail West of Miami; Bob and the late Cissy Parker of Tulsa; Elliott and Lu Fenton of Oklahoma City; Jean and the late Joe Holliman of Tulsa; Glenn and Veronica Cox of Bartlesville; Paul and Ann Milburn of Shawnee; and Mouzon and Gayle Biggs of Tulsa. 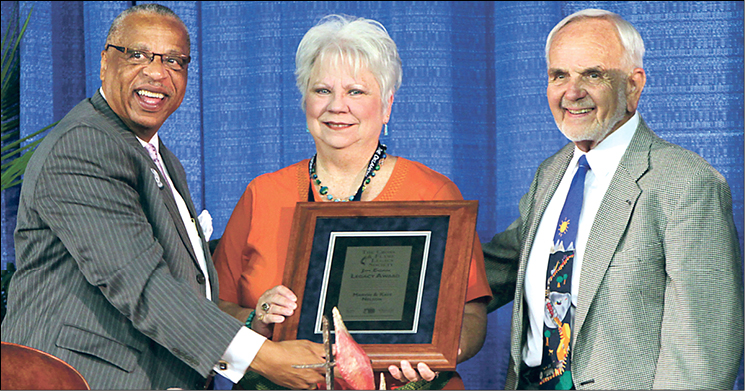 Bishop Hayes presents Kaye and Marvin Nelson with the Jim Egan Legacy Award during the Foundation's report at Annual Conference.
Making Disciples of Jesus Christ for the Transformation of the World