A 23-year-old OSU graduate who is new to long-distance cycling hit the road this spring to spread word in Oklahoma, Kansas, and Texas about the Wesley Foundation at that university.

Mallory Ross of Woodward graduated in 2013 from Oklahoma State University, with a major in agricultural communications and a minor in religious studies. She is a graduate intern at the United Methodist campus ministry that reaches out to OSU students. Her salary is sponsored by her home church, First United Methodist of Woodward.

Mallory bought a touring bike just this year, then hit on the idea of traveling the region to tell people "how God is working in campus ministry."

She gained encouragement from the "incredible cycling community in Stillwater."

The 1,200-mile, 26-day round-trip came together quickly. Planning started April 5, and Mallory departed from Stillwater on April 21. Her itinerary listed stints of 34 to 76 miles a day.

Her parents were "a little nervous" when they heard about her plan, Mallory said. But she decided there was no time like the present to undertake the trip.

"If you wait until you’re completely ready, you’ll probably never do it," she said. "In the attempt to avoid death, we avoid life in the process."

Her journey involved loops through southern Kansas and the Texas panhandle. In Oklahoma, she biked through parts of the Panhandle and as far south as Frederick. On the way, she stayed at churches and homes.

And she used speaking skills honed as a sorority president to tell about the Wesley Foundation.

One of Mallory’s goals on the trip was to "tell people about the exciting things that are happening" there, including the Imagine capital campaign.

During her time with the Wesley Foundation at OSU, she’s become impressed with the ministry’s diversity. The students who are involved come from locations that range from Texas to Saudi Arabia.

Through the campus ministry, Mallory has enjoyed "seeing how such different people can form a community together."

She admits she can get the jitters while speaking in front of groups, but "I usually can keep from getting ill," she said.

Pedaling the miles helped her prepare for the speaking engagements, she said. "I have a lot of time to think while I’m on my bike."

Her bicycle, loaded with gear, was a source of fascination for children she encountered. "There’s more equipment on it probably than people are used to seeing," she said.

Traveling by bike gave her a chance to "experience the roads that you’ve driven on in a car in a completely different way," she found.

She believes that "there is something pretty cool about going to great lengths to tell a story."

The trip, filled with travel in unfamiliar areas and meeting new people, also helped Mallory prepare for a new chapter in her life. Next up: she plans to pursue her passion for humanitarian work and community development through a stint with the Peace Corps in Senegal. 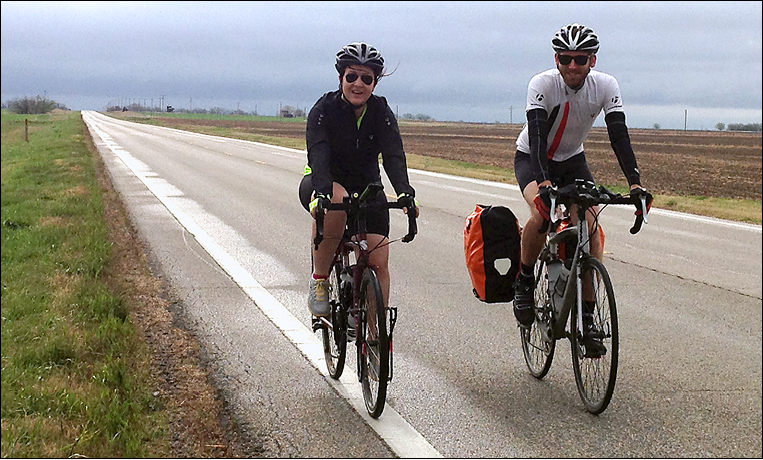 Cyclist Mallory Ross, left, is joined one day on her 1,200-mile trek by Jesse Cruce, an OSU student who also is active in the Wesley Foundation.