Chebon Kernell read the question imprinted on a plastic cup: How will you answer God’s call?

His answer in 2001 pivoted his career plans from law school to seminary, to full-time ministry as a clergy elder of the Oklahoma Indian Missionary Conference (OIMC).

He recently began a special appointment beyond the local church. He is executive secretary of Native American & Indigenous Ministries for the General Board of Global Ministries. His office is in the United Methodist Ministry Center in Oklahoma City.

This work expands upon "An Act of Repentance Toward Healing Relationships With Indigenous People," a high moment of the 2012 United Methodist General Conference in Tampa, Fla.

Rev. Kernell was present at the 2012 service. It’s another defining moment in his personal story.

Kernell’s current work includes coordinating another Act of Repentance. In November, the denomination’s Council of Bishops will participate in that service when the Council meets in Oklahoma City.

Kernell is of the Seminole Nation of Oklahoma. His homeland is the southeastern United States. His mother and grandmother were Methodists, and he grew up attending the OIMC Seminole Hitchitee United Methodist Church, where he was baptized at age 12.

That church, near his maternal family allotment land, also set very close to the tribe’s ceremonial center, where his maternal grandfather was active. But as a youngster, Kernell rejected indigenous ceremonies as non-Christian.

"All that changed when I reached young adulthood," he said.

Kernell had graduated from Oklahoma City University and taken the Law School Admission Test. He and his wife, Sara, had a child. Then he was asked to give his testimony at an OIMC event in 2001.

He spoke to Native American young adults about discerning God’s call. Afterward, strolling among displays by United Methodist seminaries, he picked up that plastic cup.

Back in his guest room, examining the display items he collected, the question on that cup staggered him.

"I was compelling all these people around me to take that call seriously, when I had not even taken it seriously myself," he explained.

He made his commitment to God that night.

As he gained more education, his view of Christianity underwent seismic change.

"I would say I lost the European version of God," he described.

He continued, "I’m speaking honestly. The only intent is to protect our ways of wellness in Native American communities. They are pleasing in the eyes of God even if the name of God was never brought up. We’ve known God since the beginning of time."

He named several Native American concepts that influenced Christianity, including fervent prayer. That’s the subject for a book he is writing.

Kernell is working directly with bishops and annual conferences’ staff.

His work is based in Resolution No. 3324, "Trail of Repentance and Healing," approved by the 2012 General Conference.

United Methodists are directed to connect in healing work "beside indigenous persons, to seek solutions to current problems" and more. Annual conferences as well as churches are to nurture relationships and "to implement specific actions to demonstrate a genuine attitude of repentance." (Resolution No. 3324)

Kernell said 13 annual conferences are engaged in the ministry at this time.

This ministry is not one of completing a checklist, he explained. "I cannot dictate what healing is. We’re looking for movement. It’s not have an event and you’re done. Are we done being the Church ever?

"It cannot be Native American people show up for what an annual conference planned for them. That’s colonization again," he said. "And the Native Americans can’t say, You plan it and we’ll show up. Be in conversation with each other, and out of that will be experiential understanding."

Kernell identifies education of U.S. United Methodist leaders as his priority at this time.

"I try to teach the episcopacy, and whoever is involved with this work, a solid understanding of what it means to be Native today. Native American United Methodists feel they are not being listened to even today."

He wants this ministry to move the Church "to another place of awareness, to be more affirming," connecting with indigenous people in mutual respect.

"The core of our spirituality is how we treat people," Kernell said. His thoughtful term for that: reverent hospitality.

To contact him: gkernell@umcmission.org, 405-530-2056. He can point churches to useful resources. 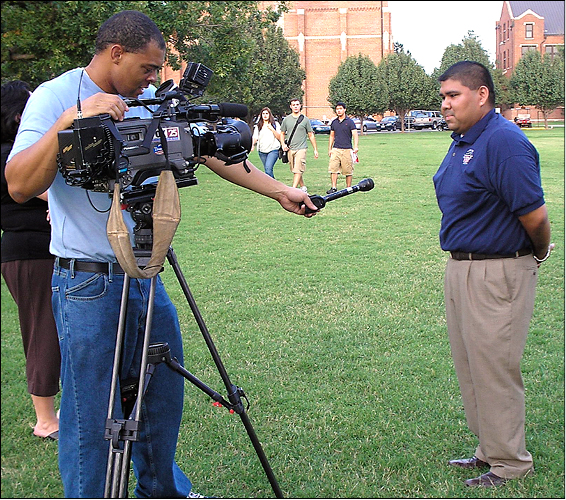 Chebon Kernell, right, speaks about the "Rock the Native Vote" campaign in a FOX News interview on the Oklahoma City University campus.
Making Disciples of Jesus Christ for the Transformation of the World