The guest preacher for Annual Conference is a preacher’s kid and self-proclaimed technology geek from the North Georgia Conference.

Jasmine Rose Smothers’ messages for Oklahoma United Methodists are titled "We Can Only Imagine" (Isaiah 6:1-8) and "Something Old, Something New, Something Borrowed, and Something Blue" (Ezekiel 2:1-3:3, 10-12).

She said she is honored to serve the Church and her community as a social media and technology trainer, a church consultant, a workshop facilitator, and an advocate for young people and under-served populations.

An ordained elder, she joined the Connectional Ministries staff in 2011.

"What distinguishes Jasmine is her passion and drive are not rooted in her own advancement but the good of the conference overall. It’s the kind of energy we can all grow from and with," said Connectional Ministries Director Micheal Selleck when Smothers joined the staff.

"Jasmine is one of the people who has earned her way to the national scene of church ministry and decision making.

"She has a better grasp of the wider connection than most."

He added, "She can think on her feet in committee work, preach with depth and wisdom, and effuses grace even in the most grumpy situations."

While at First UMC, Atlanta, she opened Atlanta First Day School. At Powder Springs-First, she led a growing youth ministry.

She serves as a Safe Sanctuary trainer and Urban Ministry volunteer.

Smothers was on the board of the General Commission on Religion & Race and was a delegate to two World Methodist Conferences and a Global Gathering for Young People.

She has written for The Upper Room and for WellSprings, a journal for UM clergywomen.

A native of Atlanta, she loves music and traveling. She earned a B.A. in political science at Spelman College and M.Div. from Candler School of Theology. 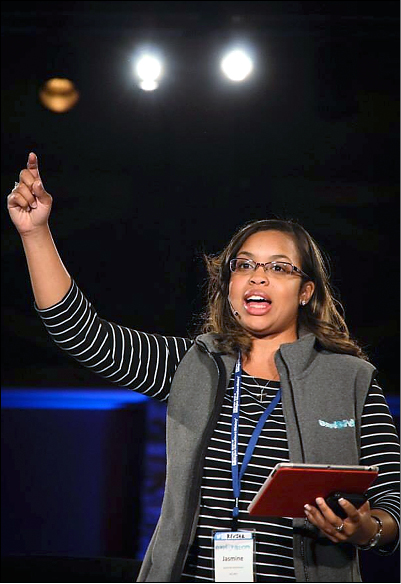 In Denver, Rev. Jasmine Smothers speaks to young adults at Exploration 2013, a national UM discernment event, sponsored by the General Board of Higher Education & Ministry.