A mortgage-burning was a highlight when Minco-First United Methodist Church marked 125 years of ministry on April 27.

The day of looking back also included honoring members active in the church for 66 and 69 years and opening a time capsule, assembled for the church’s centennial in 1989.

The Minco Methodist Church was established in Indian Territory in 1889, southwest and across the Canadian River from the tent city that became the state’s capital. Being the first church in the community, the white frame building also was used for years as Minco’s first school and community center.

In it, the first Baptist Church of Minco also was organized, and out of it came leaders of the Presbyterian Church.

On May 8, 1949, the cornerstone was laid for a new building on the same street corner. That same year, the first service was held in it on Aug. 21.

Minco-First enters its next era by reaching out to its rural community in new ways. An after-school children’s program will launch this fall, Rev. Walton said, with a Vacation Bible School preview in July. A grief support group will start soon. And the Bell Choir is drawing new interest. 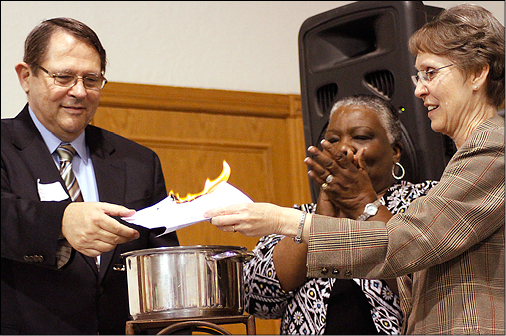