The 2014 UMW Assembly drew 97 Oklahoma United Methodist Women to Louisville, Ky., on April 25-27. Among them was 13-year-old UMW member Hannah Campbell of Tulsa.

I was very happy when my mother (Rev. EvaMarie Campbell) told me I would be going with her to the UMW Assembly. She told me that I would be seeing United Methodist Women from all over the world. I was also happy to miss school for four days.

Along with 54 other United Methodist Women from across Oklahoma, we rode a charter bus all the way to Louisville, Ky., in April. This wasn’t my first long bus ride. I took a bus just like this one on Choir Tour last summer to New Orleans. During the UMW bus ride I enjoyed the singing and games, especially two games, "Biblical Couples" and "What’s in Your Purse." I found the conversations happening around me to be quite interesting, too.

When we arrived in Louisville on Thursday, we had lunch and then headed over to Churchill Downs, where the Kentucky Derby is held. I love horses and someday would like to have one run the Derby. I got a cellphone case with horses on it and a bracelet with the name "Secretariat." I wore it each day!

We stayed in the Galt House Hotel. The lines for the elevators were VERY long. In the elevator I met a woman who is a firefighter from Sumner, S.C. She liked my glasses and remembered me each time she saw me throughout the weekend.

She was really cool! UMW women can do anything!

Twice my mom and I took the stairs to our room, which was on the 15th floor! To get to the convention center, we were able to walk through above-ground tunnels – that was really cool.

To sign in for the Assembly, we stood in line (again), and then we got to pick out our own Assembly Bag – I chose a tan bag with white polka-dots. That evening at a group dinner, I got to be with Meri Whitaker, the director of Cookson Hills Center in Oklahoma. Meri has known me since I was born. I always love getting to see her and hear her stories.

Friday morning, the Assembly officially started. One section of the convention center was "Experience Hall." There were tons of fair-trade booths set up. I really enjoyed walking through the booths and looking at all the items made by women and children from around the world. I purchased a plush blue hippo from Guatemala and a headband from Africa. I think it’s amazing how the money used to pay for souvenirs went to help women and children in different countries.

The worship services were filled with all the women from everywhere! We stood in line (again) just to get in the door!

There was an all-woman band, song leader, and worship leader. They even played two songs that I sing in my choir at church! I had to immediately text my friends back home and let them know what we were singing.

Each service had special appearances from groups the United Methodist Women support. We got to hear the choir from Redbird Mission, and girls from an after-school program in Cleveland, Ohio, danced and sang. It was awesome!

I attended a few of the workshops. One I attended with my mom was "Communicating Across the Generations." I knew everything the leader was teaching!

Hillary Clinton spoke on Saturday morning, and I thought it was cool that she was talking about something I’m a part of and to see all the Secret Service men.

When Hillary was talking, she quoted John Wesley. That was really neat because I have a shirt, from my Confirmation Class last year, that has that same John Wesley quote on it.

I feel happy that I was able to attend Assembly 2014 and to learn more about what United Methodist Women is all about!

(Hannah Campbell is a member of the UMW Peace Circle at Tulsa-Boston Avenue UMC.) 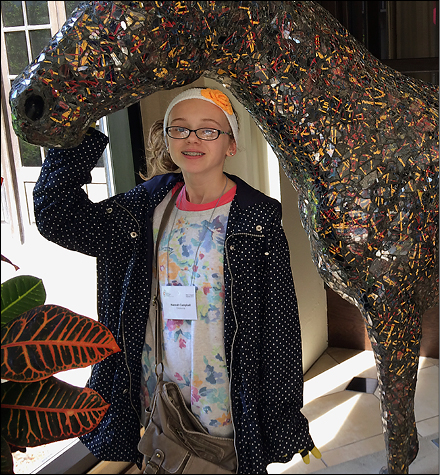 UMW member Hannah Campbell of Tulsa encounters a hotel art installation in Louisville, Ky., the city that hosts the Kentucky Derby.
Making Disciples of Jesus Christ for the Transformation of the World