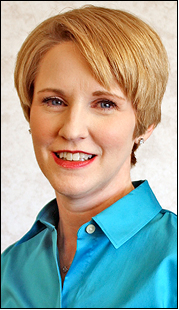 Planning already has begun for the 2015 Re-Ignite Workshops, under the leadership of a new coordinator: Rebekah Hasty.

She recently held a "listening session" with members of the Conference’s Leadership Development Ministry Team and will meet in late April with the district superintendents.

These annual winter classes, offered at 11 regional sites, are designed especially for laypeople.

The workshops emphasize leadership education and spiritual growth in addition to group worship. Participants from different churches connect with one another.

The coordinator role expands Hasty’s service to the Conference. She also is administrative assistant for Craig Stinson, director of Connectional Ministries, at the United Methodist Ministry Center, Oklahoma City.

A former high school teacher, she is a member of OKC-New Hope UMC.

"Coming from the world of being a teacher, she’s constantly on the lookout of how to help people learn something," said Rev. Stinson. "She knows it’s a gift when somebody gives their time to come to these. We want to make sure we are giving them something in return."

Hasty "wants every person to have something specific to take home and use in their work and their lives. It’s the teacher in her," he added.

Stinson said, "We really appreciate what Aly’s done. She applied her creativity to the workshops, coming from the angle of a young adult." Shahan expanded the concept of local-church leader training into events that appealed to a larger, multi-generational audience.

"That also allowed a freedom in the [district] planning groups to imagine these in different ways. We’re really trying to listen to what the laypeople are asking for," Stinson said.

Shahan summarized the 2014 workshops. Classes on spirituality/discipleship had the best attendance. The topic of conflict resolution also drew high interest.

"The biggest thing I heard was that people love that, every year, the classes are different," Shahan said. "And they love that people of different ages are there."

One youth group focused on helping the hungry. An urban group packed Blizzard Bags — socks, gloves, a winter hat, energy bars, a can of soup, and bottle of water — and invited workshop participants to carry the bags in their cars to hand out when they saw people in need.

The North and South Oklahoma City Districts’ event had the greatest turnout, with 277 participants.

A total of 239 people attended the Muskogee sessions, and 236 gathered at Claremore-First, in Bartlesville District.