Wendy Lambert knew she must go to downtown Oklahoma City on April 19, 1995. She knew the federal building had been bombed. But she didn’t know why she felt compelled to be there.

God knew. Wendy was a witness that day to love amid tragedy.

And because a witness is supposed to share, Wendy explains, she recently traveled to Newtown, Conn., where a school shooting claimed 26 lives on Dec. 14, 2012. She assured Newtown residents of God’s presence when hearts break, told them how God acts through good people who respond in crises.

But almost 20 years ago, she could not understand the urge within her to go to the scene. What help could a physical therapist in western Oklahoma offer?

She went anyway. Yet even as she assisted medical personnel at the site, the question persisted: Why am I here?

Evening brought to her a curious sense of release amid frustration over the unsettled question. Lambert began driving home.

Then her mother called from Choctaw, where her parents lived.

To help a friend, her father had gone that morning to an appointment at the Murrah Federal Building. He had not returned, said her mother.

"In that moment I knew he had lost his life," Lambert recalls.

Tragedy — in the extreme — bonds Newtown’s residents with this Oklahoman who now is an associate pastor at OKC-St. Luke’s United Methodist Church.

But their parallel stories don’t end at tragedy. Goodness and kindness always outweigh the terrible, Lambert assured them during her February visit.

"Looking back, I was able to see God’s work even in the midst of great tragedy. My purpose for being there then is to share now," she says.

She continues, "There are going to be momentary acts of evil and violence, but the collective act of kindness in the world is much greater. We know from studies that people who grow up in violence, it affects them. So theoretically the world should be crumbling; every evil act should beget more evil. Why hasn’t it? Those destructive things are never as powerful as the lasting kindness.

"Kindness: it doesn’t take much. In that massive explosion of destruction, I remember a cup of coffee."

Lambert also remembers sheets of paper posted on a wall at a downtown church in 1995. Her family and others searched the names listed. Less than two years ago, she learned that church was St. Luke’s.

"Here’s my family of faith that I love now, ministering to us long before we ever came here!" she exclaims. "How exciting to know that God, even in our lowest time, is sharing love with us in very special ways."

"God does grieve in those moments, but God works through all the kindness of all these different people. Every year I remember back to all these people who gave so much. We have to do the good and kind things. It makes a difference. That’s what really changes lives."

Lambert has become a special speaker for the First Person: Stories of Hope project at the Oklahoma City National Memorial & Museum. By appointment, survivors talk to groups touring the memorial.

That’s where Lambert and a youth mission team from Newtown first connected.

The team came to Oklahoma last year to assist in the disaster recovery following May’s tornadoes. Their sponsor was Ben’s Lighthouse, a foundation named for 6-year-old Ben Wheeler, one of the children killed at Sandy Hook Elementary School.

The national memorial was their first stop. Lambert was the First Person speaker that day.

"I felt I wanted to reach out to them, let them know people of Oklahoma were grateful for their willingness to come," she recalls.

So Lambert arranged to meet them again, at Plaza Towers Elementary School in Moore. She also gave them gift bags from St. Luke’s.

Last fall, Lambert was invited to Newtown. She spoke to a town gathering on Feb. 1 and preached twice at Trinity Episcopal Church on Feb. 2. Ben’s Lighthouse provided for her visit.

Reconnecting with the mission team members was a highlight for her.

Lambert also was asked to tell her story about the bombing. "It’s one thing to lose a parent, but you’re talking to people who have lost children," she describes. The experience overall weighed upon this mother of two.

She met Ben Wheeler’s family. The mothers noted their bond of tragedy in the limelight.

"You are in a weird position because you can never get away from that public arena," Lambert says. "There are positives and negatives of having it be in such a public way. This is my personal pain. There’s comfort in that everybody shares it, but sometimes it feels very invasive."

"I thought: I’m so grateful this boy’s alive," Lambert says.

After that encounter, she found herself questioning how best to remember not only those who died but also celebrate those who survive.

"We remember the lives cut short, give thanks for the time they lived," Lambert concludes, "but we also give thanks going forward, for the lives that continue to be. That was really profound for me." 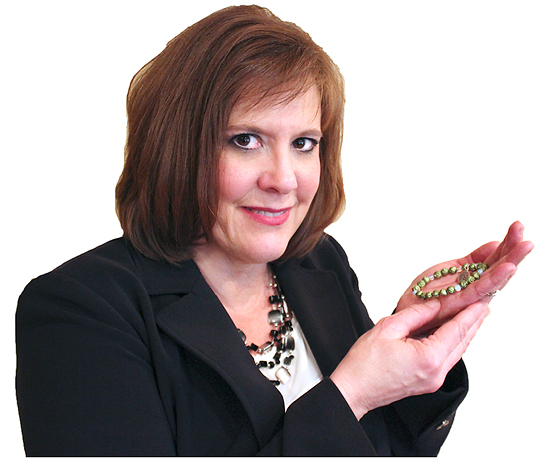 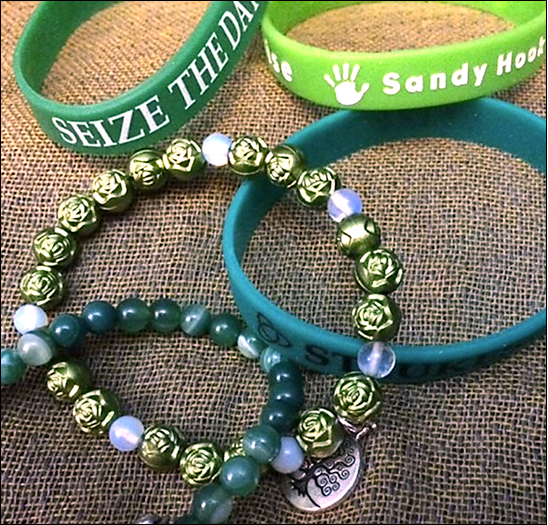 Upper left, a bracelet from OKC-St. Luke’s is placed with others that were made to remember the Newtown, Conn., school shooting victims. The St. Luke’s jewelry is imprinted with "Seize the Day," the church’s 2014 ministry theme. Associate Pastor Wendy Lambert wears the green bead bracelet, given to her in Newtown, and also a green St. Luke’s bracelet, in tribute to Nate Wheeler, a student who survived.