For both this church and the camps, guests can’t sit at just one table.

They feed hundreds of people at once. To succeed, they don’t merely multiply ingredients for a recipe that serves five. And so their time together at St. Luke’s involved commercial-size pots and pans, multiple ovens, walk-in refrigerators, and enough food to satisfy hundreds.

Chef Schauer welcomed Parker’s request to lead the training. The chef holds a hotel/restaurant management degree from the University of Houston. This is his fifth year of service at St. Luke’s Church.

"I want to share my knowledge; it does me no good to keep it to myself," he said. The event also was a valuable opportunity for the camps’ kitchen staffs to exchange information, he said.

Parker spoke of changes in the camps’ food services and his desire to offer more healthy choices. Physical and spiritual strength go hand-in-hand, he said. Parker enjoys cooking; he and his wife hosted the staff who attended training.

"We are trying to elevate quality for our campers," Parker said. "It’s important that we serve food that is healthy, looks good, and saves money."

"You want to be able to provide good food and be able to pay for it," Schauer agreed. "I want to make sure the money I’m given is used wisely."

For example, he makes a pulled pork recipe by using pork butt, which costs about $1.75 per pound, instead of brisket, considerably more expensive. That’s one of the dishes he shared with the camps’ kitchen teams.

"When somebody says something about saving money, you’re going to try it," said Peggy East from Canyon Camp.

Chicken enchiladas and "chicken salad with Lawry’s Seasoned Salt" were among her favorite dishes at the training.

She relished the individual meat loaves they made with barbecue sauce (instead of ketchup or tomato sauce).

"It was a great idea," Craig said.

During the two days, the camps crews served alongside the church’s food service staff.

When I visited, they all were preparing for 440 luncheon guests at St. Luke’s. Parker described the remarkable scene as 40 pounds of chicken and 4 gallons of mayonnaise, plus other ingredients, became chicken salad.

But that chocolate mixture had my attention. The cooks were making "chocolate cobbler." It was delicious, according to both East and Craig, and they will serve it at camp.

So now I’m packing my walking shoes, flashlight, and Bible. 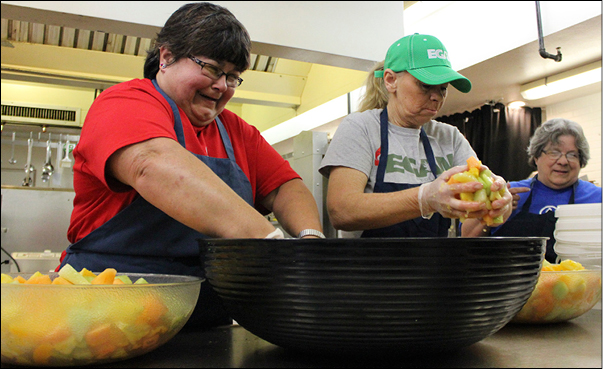