Bishop Robert Hayes Jr. will preach during the 10:45 a.m. worship. Following that, there will be a catered luncheon and viewing of an anniversary video in Fellowship Hall.

First UMC was officially established on April 28, 1889, the first Sunday after the Oklahoma Land Run of April 22. A call went out for all Methodists to meet at a site just south of the church’s location today. By June 1889, the church had purchased a corner lot on Northwest Fourth and Robinson, which has remained its location for 125 years, surviving two world wars and the urban flight of the 1960s.

On April 19, 1995, First Church vaulted to worldwide attention with the tragic bombing of the Murrah Federal Building. First Church was heavily damaged, and the congregation was forced to relocate for three years; a new sanctuary and then an educational building were constructed. The First Church family members give special thanks to Trinity Baptist Church, also downtown, for hosting them during those three years.

Within 36 hours of the bombing, a banner was hung from the church, declaring the members’ can-do spirit for the entire world to see: "OUR GOD REIGNS AND WE WILL REMAIN!"

The first Sunday in the newly constructed sanctuary was Easter 1998.

The defining essence of this church is captured in the stained-glass window of its Chapel. Salvaged from the bomb-blasted fragments, the window places Christ at the center of all and declares: "The Lord takes broken pieces and by His loves makes us whole."

For First UMC, these words are more than a motto; they are a promise of His healing grace.

The anniversary events on April 13 are free and open to the public. First Church invites new friends and those from the past to join the celebration. Commemorative items also will be sold, including a glass block that bears an etching of the Church, a leather bookmark, and a DVD of the church’s history. 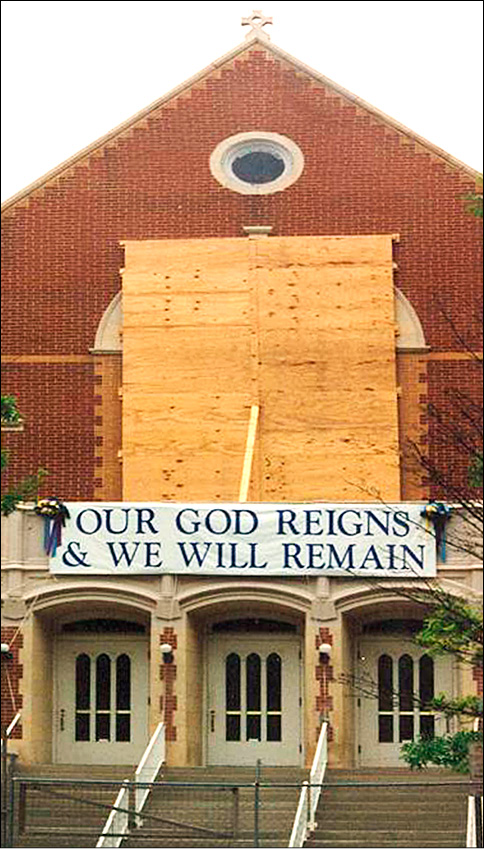 This archival photo shows the banner that hung at OKC-First Church after the 1995 bombing.