On behalf of the Conference’s Office of Mission, Carlos Ramirez invited the National Hispanic/Latino Plan missionaries to come to Oklahoma.

So more than two-dozen leaders traveled to Oklahoma City for the first-ever meeting of the full group, said Rev. Ramirez.

Deployed through the General Board of Global Missions, all these leaders connect digitally. Some had met in person, such as when Ramirez attended a School of Congregational Development, in Colorado.

Yet the vision grew to come together at one location for networking, education, and support.

Thus in late January at the United Methodist Ministry Center in Oklahoma City, the missionaries studied changing demographics and deepened their personal spiritual growth. They trained in using digital technologies.

They learned about Native American expressions of faith while visiting an Oklahoma Indian Missionary Conference church.

Ramirez said the event validated his objective to put more emphasis on reaching second- and third-generation Hispanics in Oklahoma.

Hospitality for the special event was coordinated by Kristin Terrell-Wilkes in the Office of Mission. The Conference’s Criminal Justice and Mercy Ministries provided transportation in the city. 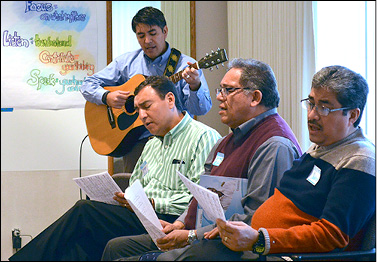 With his guitar, Carlos Ramirez leads a song during closing worship.