Annual Conference 2014 -- Proposal to reduce from 12 to 8 districts

Delegates will vote May 29
(Part 2 of a series)

Oklahoma Annual Conference delegates now are studying a proposal to reduce, from 12 to eight, the number of districts.

They will vote on the recommendation May 29, final day of the 2014 Annual Conference, which meets May 26-29 in Oklahoma City. If approved, this change will become effective on June 1, 2015.

The one-year period will smooth transition to new structures, including district names and boundaries, administrative systems, personnel, and properties.

District Transition Teams, with equal lay and clergy representation, will collaborate with superintendents to make major strategic decisions prior to the implementation date. Superintendents will become more fully engaged as "key missional strategists."

The draft document can be viewed online at www.okumc.org/annual_conference. It also will appear in the Pre-Conference Workbook.

"This is a working document," noted Conference Lay Leader Chuck Stewart of Stilwell. "We will live into this."

During recent meetings, both the Board of Laity and the Council on Finance & Administration affirmed realignment.

The Annual Conference vote will address only the number of districts. The bishop and Cabinet determine boundaries, according to the Book of Discipline.

Informal discussions about districts have been ongoing since Bishop Robert Hayes Jr. began his assignment here, in 2004, he remarked.

"We are ready now to make an informed and intelligent decision," said the bishop.

"I believe the Conference should do the same thing we’ve asked the churches to do: Take a long, hard look at how we are doing ministry and move toward having the structure that will assist us in accomplishing our mission."

The Church’s mission is to make disciples who transform the world, understanding that mission is best achieved at the local-church level (Book of Discipline, paragraph 120). The Oklahoma Conference Strategic Plan, approved in 2008, provides a framework for fulfilling that mission on all levels.

Mission at core of change

"View every area of the Church’s ministry as flowing from that mission," urged national church consultant Lovett Weems. He has met with the Conference corporate board and presented Nov. 5 at the "Day With the Bishop" for clergypersons.

By "reframing the work of every group, from silo mentality to where everyone is looking at the same goal, you begin to get synergy," he explained. "One strengthens the other."

Dr. Weems said a number of annual conferences have considered district realignments in recent years. To succeed, such change must be for missional reasons, not merely to save money.

"If money is saved, it is a benefit to free resources for Conference or local use," he said.

Oklahoma leaders agree this district proposal also will result in a reduction in Apportionment dollars for the local churches.

The draft document acknowledges, "Due to changes in demographics and membership losses, it seems time to make a change in our structure."

That year, in a special called session of Annual Conference that day, 73 percent of delegates voted to move from 14 to 12 districts. Altus and Alva Districts were discontinued. Conference Archivist Christina Wolf assisted in researching this history.

Recently, the Texas Conference downsized from 12 to seven districts.

The Memphis (Tenn.) Conference will vote in June on realigning from seven to four districts. A financial shortfall is forcing reductions in several areas for that annual conference, according to the Jan. 27 issue of the United Methodist Reporter.

"Bishop William McAlilly confessed these challenging decisions are indicative of the importance in moving toward the downsizing of districts and Cabinet so that funding might be freed up without compromising ministry and mission opportunities and goals," stated the Reporter story.

According to Oklahoma's bishop, realignments by some other annual conferences have created districts of 100 or more churches.

In a new video message, Bishop Hayes emphasizes, "Oklahoma is blessed. Unlike conferences that have had to do this out of necessity, we are proposing to do this from a position of strength."

If the proposal is adopted, districts will get new names, none of which mirror city names.

The total number of congregations in a district is expected to range between 55 and 75 churches, according to the draft document.

At this time, the average number of congregations is 43 in each of Oklahoma's districts. Ardmore has the fewest, with 39. The highest concentration of congregations, 51, is in South OKC District.

The Cabinet has been mapping new district names and boundaries; that work is not finalized. Some preliminary boundaries follow major highways.

The district missional realignment proposal is one of three major proposals scheduled for action on the final day of the 2014 Annual Conference.

1. The New People New Places fund. Grants will be available to local churches and more, if delegates approve this new budget item.

2. Changes in administration of the health benefits system for retired clergy. Retirees and their spouses will continue to be insured.

Prior to May 29, several opportunities are available for lay and clergy delegates, retired clergy, church financial officers and other leaders, as well as other interested persons, to ask questions and gain clarity on all three proposals.

Coming in the next issue: Proposal about retired clergy health benefits 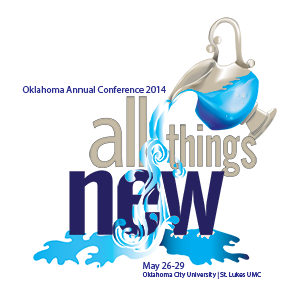