The cross waits at the front of the altar in Enid-First United Methodist Church on Good Friday. People quietly enter the sanctuary and take their seats. At noon, a service begins that brings together the people of four downtown Enid churches — as has been done for more than 30 years.

A large cross is carried at the front of the procession as the walkers move between the churches. The people enter each church and share in a portion of the liturgy.

The walk begins at First United Methodist, proceeds to the Episcopal church, which is a block away, and then to the Catholic church across the street. Walking to First Presbyterian, several blocks away, is deemed too far for the hour-long observance, but its clergy give leadership in the program.

"It’s a coming together of people of all faiths," said Susan Southall, associate pastor at First UMC. "There’s something wonderful about that. We are all sitting at the foot of the cross, different denominations but all redeemed by the blood of Jesus Christ."

At the Catholic church, the liturgy is in both Spanish and English. For Rev. Southall, that’s a powerful moment, signifying that people are not separated by language, she said. At each church, a verse of "O Sacred Head, Now Wounded" is sung.

No one now associated with the event knows just when it started. Randy Mitchell, senior pastor at First UMC, recalled that it was held in the 1980s, when he was attending Phillips seminary at Enid.

At some point, leaders of the United Methodist, Episcopal, and Catholic churches gathered and planned a common Good Friday service, called Stations of the Cross. Five years ago, the Presbyterian church was invited to participate.

Every year the same liturgy is used, although each church presents it according to that faith community’s understanding.

"The power of good liturgy doesn’t change over time," Southall said. "The important thing is that we can all come together; we have found a way."

She added, "The pastor who gives the homily is always the newest or one that’s about to leave."

St. Francis Xavier volunteers built the cross, which is on rollers. Catholic deacon Tony Crispo believes the original cross is still being used. After the walk ends, the cross is stored until the next year. "It’s always between these churches," Deacon Crispo said.

On this Good Friday, Presbyterian Pastor Andrew Long read Scripture at First United Methodist. Then some in the crowd sang hymns as they walked to the second stop. Episcopal rector John Toles led the liturgy there, and then the walkers proceeded across the street to the Catholic church, where Rev. Dr. Toles delivered the homily.

"This is my sermon on the love of God," he said. It is easier for people to acknowledge the Gospel when you talk about the birth of Jesus and the miracles he performed, the clergyman said, rather than "the humiliation of the cross."

Yet the cross "points to the pure love of God. He loved you enough to die for you," Toles said. "God’s love has been poured out on all flesh, and all you have to do is accept it. That’s what makes this Good Friday."

Each year on Good Friday, the people of Enid’s downtown churches reaffirm that, despite various religions, they can come together to observe the love of God.

(Robert Barron is a member of Enid-Willow View UMC.)

Tulsa-University UMC Pastor Nathan Mattox and his young son take a turn carrying a cross on Good Friday, as about 25 people walked the University of Tulsa perimeter, observing the Stations of the Cross, before the Service of Darkness in the church. The service closed as Rev. Mattox sang "Were You There" a capella. The next day, the church van operated as a Communion Food Truck at a local festival.
Photo by Becky Balser

In Tulsa, University UMC members staffed an unusual car wash. It was not a fundraiser but a holy act of service on Maundy Thursday, recalling when Jesus told his disciples to wash each other’s feet. After a car was washed, its driver washed another car in turn, explained Pastor Nathan Mattox. "Come serve and be served" became the rally call.
Photo by Becky Balser 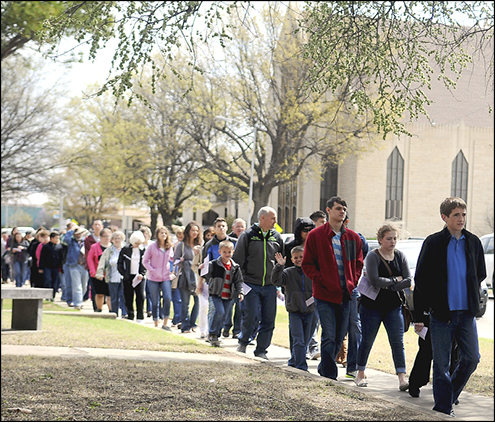 At noontime April 3, people walk from Enid-First United Methodist (in background) to the Episcopal church, the second stop in a long-running ecumenical Good Friday observance.
Photo by Bonnie Vculek 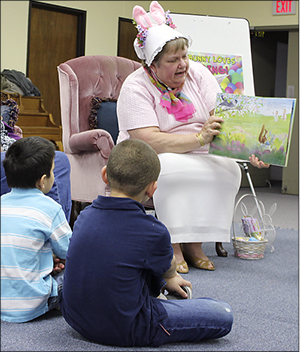