On April 17, Oklahoma United Methodist Circle of Care clients, supporters, and staff gathered for the 2015 Friends of Children Banquet.

But instead of having a dinner in Oklahoma City on one night and another in Tulsa on a different night, as in years past, the agency held both dinners on the same night — and joined the audiences through a live video feed.

Tom Harrison served as the regional host in Tulsa, and Robert Gorrell hosted in Oklahoma City.

At the annual banquets, Circle of Care names recipients of the McNaught Heart of Ministry Award.

In Oklahoma City, Paul and Ann Milburn were honored for their transformational impact on the Child SHARE program, through their challenge grants.

In Tulsa, Jenny and Jono Helmerich were honored for their service in the 2013 Pearl’s Hope capital drive and with the completion of the Child SHARE expansion challenge. Jenny also serves as a Circle of Care board member.

The award, named for Burrel and JoAnn McNaught, was created to recognize individuals who have demonstrated, time and again, their support for the agency and other ministries of the Church. Burrel has been a longtime pastor and district superintendent in Oklahoma Conference. JoAnn served a variety of UM ministries through the years, including as Conference treasurer and as a Circle of Care board member.

Also during the banquet, clients from the agency’s Preparation for Adult Living program, Child SHARE, and Pearl’s Hope shared their testimonies. Alton Carter, director of youth ministries for Stillwater-First UMC and author of "The Boy Who Carried Bricks," described his experiences growing up in foster care and reminded the audiences why it is critically important to recruit and support loving homes for children in crisis situations. In his closing comments, Bishop Hayes encouraged attendees to do what they can to support those in need.

The telecommunications efforts were successful in uniting the audiences, totaling about 350 people, on the one night to celebrate help, healing, and hope. Future dinners will capitalize on lessons learned and improve upon this success. Special thanks go to the event’s statewide sponsors: The Helmerich Trust and the Oklahoma United Methodist Foundation. 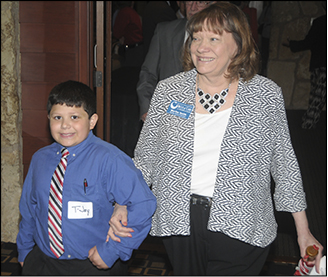 TJ escorts Martha Smith at the Friends of Children Banquet.