On a cool evening in April, laughter and the sounds of tuning instruments filtered through the student center. Rows of tables began to fill with food and T-shirts. The atmosphere was festive as preparations were completed for the eighth annual Love Not Hate Day on the campus of Oklahoma City University.

This tradition began in 2008. That spring, the theater department scheduled "The Laramie Project," a play about the death of Matthew Shepherd, the victim of a hate crime in Wyoming. Then members of Westboro Baptist Church in Kansas announced they would stage a public protest near the Oklahoma City campus.

The university community discussed how best to respond to this protest.

Jennifer Long, director of the OCU Wesley Center at that time, led an effort to print 1,000 T-shirts with the words "Love Not Hate" prominent on the front. All the shirts were distributed, free of charge, in less than an hour.

When the protesters arrived, they were met by hundreds of students, staff, and faculty making a silent but powerful witness to the power of love to unite a community.

Since that day, the United Methodist campus ministry at OCU continues to sponsor Love Not Hate events, celebrating the diversity on campus and in the world.

The program has been embraced by the university community. Sodexo Food Service donates food for a casual dinner, served by its friendly staff. Student musical groups perform.

This year the Steel Drum Band played the first hour, followed by the high-energy OCUpella chorus’ rendition of popular songs.

The Wesley Center continues to provide free T-shirts, which have become very popular among students.

Other traditions have developed, too. Tie-dying stations are available to personalize shirts. An art project encourages people to express their feelings or desires on the theme.

"Loving All Our Neighbors" was the focus this year. Participants were invited to write on colorful paper the names of groups that represent neighbors in need of our attentive love.

Named were "the homeless," "fellow humans with different opinions," "foster kids," and "the ones who hate us," among other groups. The slips of paper were arranged on a board in the shape of a heart. This mirrored the T-shirt design, which featured a heart-shaped map of the world.

Wesley Center intern Rachel Honaker helped organize the day. "Honestly, it is a lot of fun to be involved in Love Not Hate Day," said the OCU senior. "It’s really all in the name. We want to encourage an atmosphere of love, not hate, where we are seeking to understand those who are different from us and accept them for who they are! That is the big draw for me in being involved in the day.

"Society is full of fear and hatred of the other. We want to stand against that and support those who are viewed as different as an important part of our community." 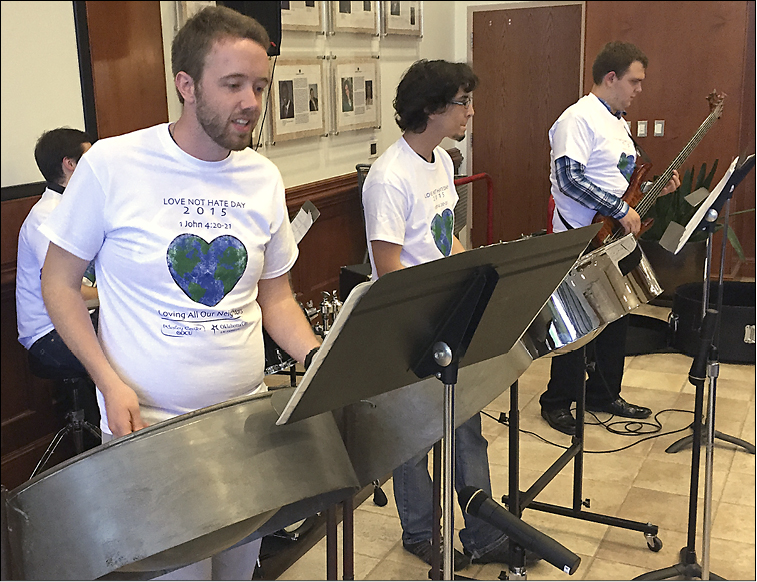 Music by students with steel drums filled the OCU student center on Love Not Hate Day. Inset: A heart-shaped world was featured on free T-shirts that day.