Two new cabins will be dedicated debt-free on June 1 at Cross Point Camp in southern Oklahoma.

Together they add 80 beds and two large meeting spaces to the United Methodist camping and retreat center on a wooded peninsula jutting into Lake Texoma. Now Cross Point can lodge up to 320 people.

The Lela Wilburn Cabin opened its doors to campers on Feb. 20, and the Healey Cabin on April 10.

Their brown exteriors blend well with the natural setting. Nantucket Dune is the interior paint color.

The cabins are design twins. Their energy-saving aspects are worth noting.

Spray-foam insulation was applied throughout, even in the attic. Long said, "We are already seeing the difference." In late winter, cabin interiors remained in the 50s when outdoor temperatures fell to the teens. Cross Point’s older cabins are not insulated.

More than 50 years ago, Methodists camped in southern Oklahoma at a site west of Turner Falls. In 1958, that ministry moved to the current lakeside location, and construction of a dining hall and 12 cabins began in 1960, according to Long. They continue in service.

Decades later, an enclosed tabernacle was built. It currently is being enlarged to 40 feet by 90 feet.

Total cost to build the Healey and Wilburn Cabins was about $700,000. They were completed under budget, Long noted.

"A lot of donors stepped up," he said. "The Healey family gave the first major gift. The Wilburns saw the need." Among other supporters, Emmaus groups long have held walks and reunions at Cross Point, and their members contributed financially.

Long is thankful for all the support.

Each new cabin is about 3,400 square feet, not including covered porches. The meeting room can accommodate at least 80, Long said, and has a kitchenette and two bathrooms.

Each of two sleeping areas has bunk beds and dorm-style restrooms. The sturdy bunks are anchored to the building’s frame, their ladders outfitted with stout handrails. Built-in shelves provide personal storage at the head of each camper’s bed. Each restroom has six sinks, three showers, and three toilet stalls.

Joyfully, Charlie Graves led the consecration of the Paul & Ann Milburn Cabin and the Foundation Cabin on April 18 at Canyon Camp, near Hinton in western Oklahoma.

The Clinton District superintendent prayed "for the people who will use these cabins: children, youth, adults — that their time spent here at Canyon Camp will be for them an encounter with the living Christ!"

Two young women validated his prayer when they told personal stories to the crowd that had trekked to the camp for the ceremony, followed by a meal.

"I discovered who I wanted to be in a tabernacle full of sweaty, stinky teenagers," she said.

And she recalled how her spirit soared when a hawk flew close as she stood by the cross atop the canyon’s red rock walls during her church confirmation class retreat.

"Each year I’ve been able to grow in my faith," she said.

Dossanna Miller was a seventh-grader when she first went to Canyon, also to CLEW Camp. Previously not a churchgoer, she became a summer camp regular. Now a student at Southwestern Oklahoma State University, she helps lead worship at the Wesley Foundation. Her faith also helped her family relationships.

"Thank you for continuing to make (Canyon) such a wonderful place to be," Miller said.

Parker met many retired United Methodist clergy at their 2014 fall retreat, which was his first official Canyon Camp event. Many told him, "I received my call at camp," he said.

Rick Trobaugh, who chairs the Board of Trustees for all three Oklahoma camps, celebrated "the possibilities of new saints being made within the walls of the canyon."

Paul and Ann Milburn, members of Shawnee-Wesley UMC, and the Oklahoma United Methodist Foundation were recognized April 18 as major donors to the cabins’ capital campaign.

The Milburns "know a lot of people who make a commitment to go into ministry at summer camp, and it’s a deep religious experience, so we think it’s a great thing to be part of," Paul said.

David Battles of the Foundation said he grew up going to the camp; his father pastored in the area. "I’ve seen it change quite a bit, but it’s always beautiful down here," he said. 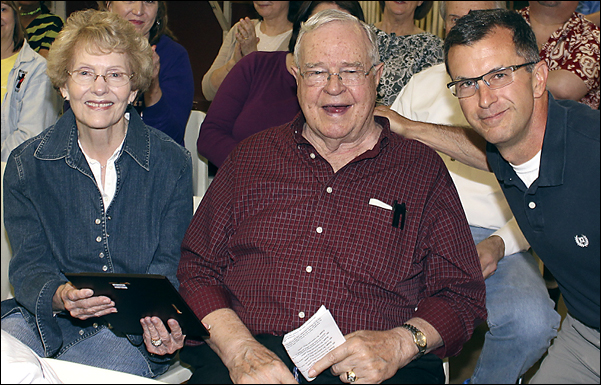 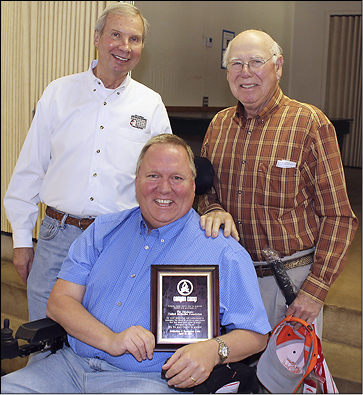 At the Canyon cabins dedication are, from left: David Battles, executive vice president, and Bill Junk, president, of the Oklahoma United Methodist Foundation; and Tom Kirby, who directed Conference Camps from 1982 to 1996. 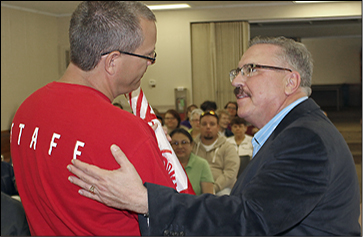 Canyon manager David Combs, left, is thanked by Randy McGuire, who directed Conference Camps from 1996 to 2014. 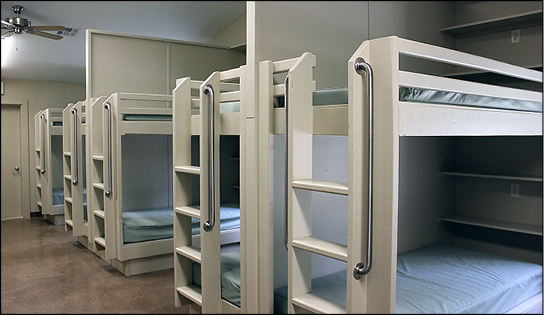 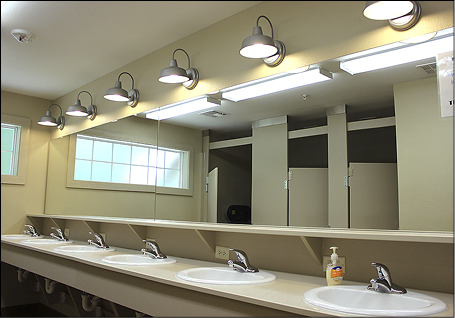 The new cabins at Cross Point include sturdy bunks with climbing rails and stylish lights above six sinks. Above: all the camp’s study pavilions now are enclosed and climate-controlled.