An emerging form of theater art is revealing untold stories from the 1995 bombing of the Alfred P. Murrah Federal Building in Oklahoma City, in recognition of the 20th anniversary of the attack.

Theater students are performing an original play based on personal interviews with more than 45 family members of victims, survivors, local officials, and first responders. OCU commissioned award-winning playwright Steve Gilroy, who is the author of works including "Motherland."

"We have a unique opportunity and responsibility to respond through art," Parsons said. "This work is a living memorial and a celebration of the tenacity, recovery, and healing process of Oklahoma City."

A portion of proceeds from the play’s publication following the event will be donated to the Oklahoma City National Memorial and Museum.

Gilroy said interviewers usually have to work quite hard to coax stories from people. "For this project, there is this incredible honesty that comes from people."

He continued, "I think that is something about the people of Oklahoma City. As soon as you start, people will talk about their experience of the bombing, and that’s one thing; but once they start to go beyond that, there are all sorts of different stories that say a lot about peoples’ ability to recover. They find themselves 20 years later where they are no longer defined by what’s happened and they are able to open new chapters in their lives."

Courtney DiBello, instructor of stage management and faculty adviser at OCU, will direct the production. She pointed out that all the student actors and crew members were not yet born or were babies in 1995.

Parsons has a vision for the play beyond the April 2015 production. He wants every high school in Oklahoma to have access to the play by creating an education package that includes scripts, a documentary produced by OCU about the making of the play, and all the materials students need to research, rehearse, and create their own productions.

"The overwhelming message that comes from everybody interviewed for this project is the regeneration of the city as the background," Gilroy said.

"But I think, in the end, it is going to be about these very powerful individual stories that when woven together are going to create quite a much bigger human story about recovery."

The OCU Smith Chapel observed the bombing anniversary with a special service at 1 p.m. April 16. Joe Meinhart, OCU professor of Sociology and Justice Studies, preached. The service also included a litany of remembrance and of thanksgiving for responders. 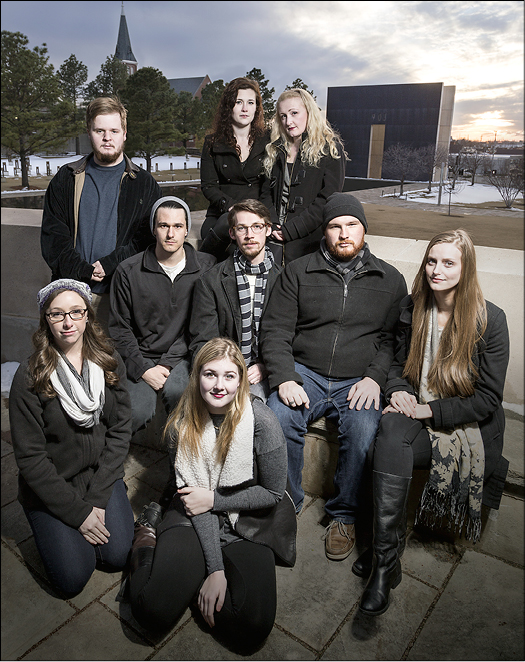 These OCU theater students are performing "The 20th Anniversary Oklahoma City Bombing Project" on April 16-19. They are shown at the memorial site.