Dream screen -- Church changes inside and out to grow in Ardmore

To reach more people for Christ, Ardmore-First United Methodist Church wasn’t satisfied with major renovation of its worship space. The prayers of the congregation also led the large county-seat church into more ministry in the streets of that city.

First UMC wants to have an ongoing effect on lives throughout Ardmore. Some say this vision began with the downtown church’s 2006 expansion into the Colvert Ministry Center.

That building, across the street from the main church, became a place that offered modern worship, expanded outreach opportunities to the community, and gave flexibility in programs and ministries that had been limited in the other structure.

It wasn’t long before the Colvert Ministry Center was packed for worship and other activities. Another option was needed.

After a time of prayer, discernment, and planning, the congregation decided, under the leadership of Senior Pastor Jessica Moffatt Seay, to take on a $3.1 million renovation of the main sanctuary, bringing all the worship services into one location.

Rev. Seay said, "In order to impact Ardmore, attract more young people, more diverse people, and live into the future now, we had to make this decision."

She cast the vision for this strategic remodel in 2012, which led to a capital campaign in 2013. Fundraising took about a year.

In the beautifully remodeled sanctuary, First Church now has one of Oklahoma’s largest indoor screens that is not a movie-theater screen. Its size is 30 feet by 17 feet. Especially unusual is its one massive screen, rather than overlapped smaller screens.

The lighting and sound systems are believed to be among the most sophisticated in the area, and new seating was installed both on the main floor and in the balcony.

As a result, attendance for worship has increased, Seay said, with a younger and more diverse audience. The church averaged 662 worshippers weekly in 2014.

A traditional service begins at 9 a.m., and the E.P.I.C. (Experiential, Participatory, Image-rich, Connective) worship, which had been in the Colvert Ministry Center, is at 11.

Ministry on the move

The vibrant spirit inside the church also is flowing out the doors.

Members began to pray regularly for their city, after learning Ardmore ranked at the top of a "most dangerous city" study that referenced FBI statistics across the state.

Associate Pastor Brad Dery said they decided to pray The Lord’s Prayer daily at noon, no matter where they were.

This prayer led them, Rev. Dery said, "onto the front lines of the battle to reclaim Ardmore for Christ."

They began reaching out to apartment residents in complexes long known as locations of criminal activities, Dery said. The church decided to regularly provide school clothes for children in those complexes, as well as food gifts and on-site prayers. Gifts vary: bags of fresh fruit, boxes of cookies, bags of potato chips, microwave popcorn, and other snacks.

Their overall goal: to start home discipleship groups with residents, for the purpose of transforming not only families, but also neighborhoods.

In a short time, First Church members were personally discipling five families on a weekly basis and building relationships with other residents through their weekly visits to the properties.

In October about 30 volunteers held a Fall Festival among the apartments, and about 100 residents joined them for hot dogs, music, and games.

Now members of the congregation are visiting 184 apartments at three complexes. The same team visits residents on a weekly basis, enabling them to build relationships and to be a faithful manifestation of God’s grace in their lives.

Also, they invite residents to join them at the Colvert Ministry Center for a free community dinner that includes worship and a short sermon, followed by small-group discipleship.

"We serve dinner at 5:30 every Sunday night so that we can invite them back to dinner during our visits," Dery explained.

Some residents do accept that invitation. For the meal and worship, they sit with the team members who have been visiting their apartment, then the team becomes their small group for discipleship discussions.

Dery remarked, "We have many exciting examples of how God is using Ardmore-First to draw people to Jesus.

"One recent example perfectly shows what we are aiming for. On our second week out, a team at Pecan Creek Apartments met a man named Tim, who decided to join us for dinner. On the ride to our church, Tim realized where we were heading and informed us that he was the boyfriend of Amber — the young woman our church recently blessed with furniture and other home furnishings.

"Tim felt welcomed and cared for, and so he brought Amber back with him the next week!"

Dery continued, "The following Sunday, Tim and Amber went with us into the community to pass out gifts. And Bishop Hayes got the opportunity to baptize Amber’s baby when he was here! We are seeing many stories like this. Our new friends are joining us because they feel welcome, loved, and cared for." 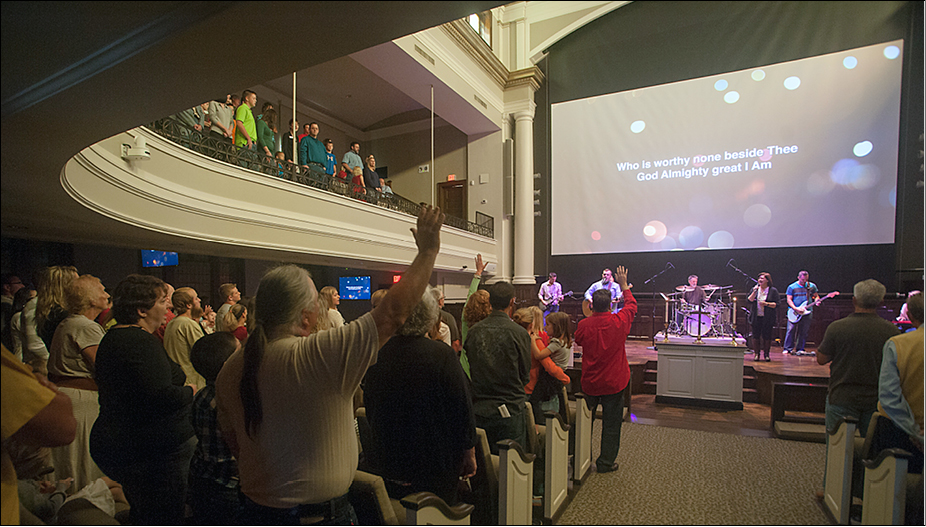 A large cross seems to float above the choir at First UMC.

Sanctuary renovations at Ardmore-First include the balcony seating. What a great view for worshippers!