Often, there are parallels found throughout scripture. In other words, a scenario that repeats itself with a different character(s) and even a variation of the issue(s) at hand. Acts 7 certainly rings true of this. Stephen was one of the seven men chosen to take care of the needy within the faith community. He was a man full of faith, grace, power, wisdom, and the Holy Spirit. Stephen was able to do many signs and great wonders among the people he served (vv. 5, 8, 10). If that description of a person in the Bible sounds quite familiar, it is because these same descriptors were used for Jesus. But, that is not where the similarities between Jesus and Stephen end. Both had a Spirit-breathed message of God for a people with ears which refused to hear and hearts bereft of any compassion. Because of their boldness in speaking truth to power, both men were set up by fearmongering, religious people. Consequently, both were executed outside of the city even though they committed no crime or sin.

So, what were those allegations against Stephen? 1) Blasphemy against Moses and God; 2) Continuously speaking of destroying the temple; and, 3) attempting to change the traditions given by Moses. Under mounting false accusations, Stephen offered a rebuttal that turned stinging rebuke at these false accusers. He laid out the history of God’s interaction with God’s people through key patriarchs beginning with Abraham. Parallel to his account of the story of God’s deliverance of God’s people time and again, Stephen did not fail to reference the constant rejection orchestrated against Moses, the prophets, and yes, even God’s own Son—Jesus Christ. He asked the council, “Which of the prophets did your ancestors not persecute?” (v. 52a). He finished by letting them know that the very law they received from Moses was the same precious law they did not follow themselves. At this, his accusers were beyond steaming with anger and itching to squash, literally, Stephen and his push against the religious establishment.
I propose Stephen was stoned to death because while he comforted the afflicted (his God-ordained ministry), his message somehow afflicted the comfortable (also, his God-ordained ministry). It is my prayer that you and I never become so comfortable in tradition, in the church, in our life that we purposely stop up our ears and our hearts become anesthetized to the Stephens among us. Or else, we are just walking around with a stone in our hand. 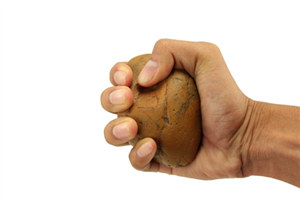 Reflection question: Try sitting down to hear from someone you may not agree with for whatever reason. Be aware of any emotions you are feeling. Did you stop up your ears? Did what was spoken make you angry? Were you open to hear a different perspective? Could you entertain the possibility of changing your views following the conversation?